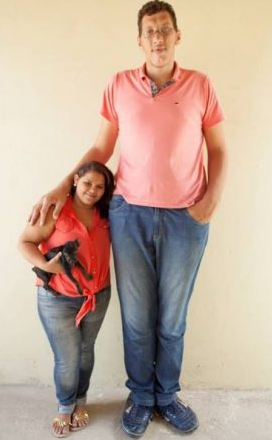 Brazil tallest man, Joelison Fernandes da Silva, standing at 7 feet 8 inches tall and is married fells in love with his beautiful heart hob, Evem Medeiros who is 5ft tall .   Their love is like fairy tale as they are both married.  Joelison is from Paraiba and is the world’s third tallest man. He was born on 18 August 1985. The remarkable love shared by Joelison and Evem has continued to amaze people all over the world. 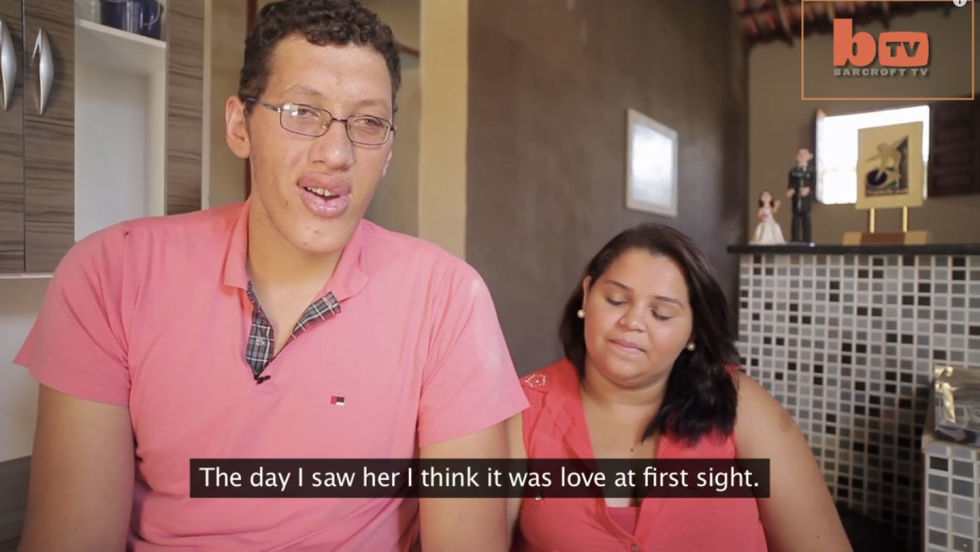 Joelison Fernandes da Silva was born with gigantism. Gigantism is an endocrine disorder resulting from long-term secretion of too much growth hormone, which accelerates the growth of muscle, bones and connective tissue in childhood or adolescence before the end of puberty. The consequence is an accelerated growth rate and increased height as well as a number of additional soft tissue changes, according to a definition by your hormones. Because of his unusual height, he was bullied and forced to drop out of school. Joelison felt embarrassed each time people stared at him and spent a good part of his life, hiding away at home. According to Nairaland, he revealed that he saw himself in a different light from the rest of the world. 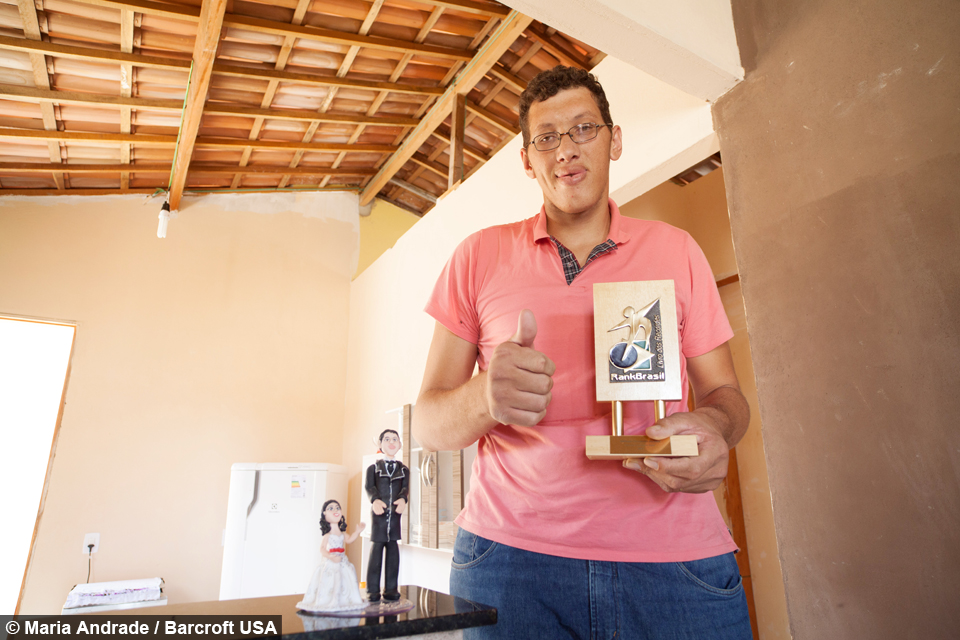 ‘I saw myself as abnormal,’ he says. However, Joelison needed to live a normal life. He wanted to be like every other person and took the bold step by removing a benign tumour through surgery on his pituitary gland at the age of 21 which helped slow his growth. Since the successful surgery, Joelison grew in confidence that he even became a local celebrity at his home town attracting admirers and attending television invites. That attraction was what led him to his now wife, Evem who was one of his admirers. 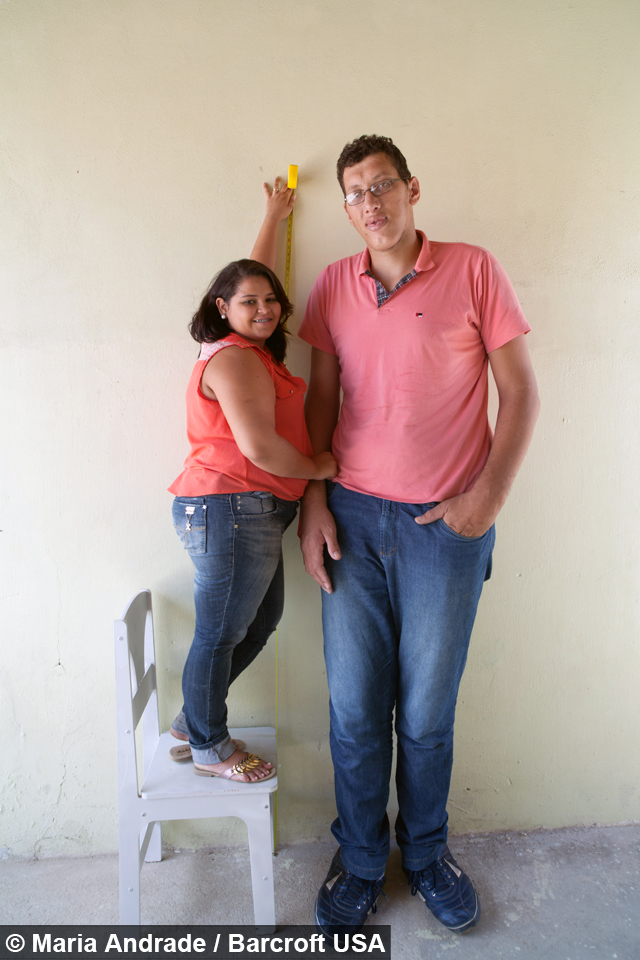 Joelison said he fell in love the first time he saw Evem. Hear him, “The first time I saw her it was love at first sight. I was charmed by her. I wanted to be with her all the time. It didn’t matter about her size. Standing at a mere 5ft, Evem swept Joelison off his feet. Their relationship has been waxing stronger showing that love is not a respecter of size.”

Joelison added about Evem: “She was basically my first woman. The first woman of my life. I was 28. I thought everything about her was beautiful but especially her eyes. She is very caring. She doesn’t show it when the cameras are here but she is caring and truthful. She has never lied to me. Joelison attributes the progress he made in life to his mother – Ivanilde Fernandes da Silva. She has been so helpful and taking good care of him right from a tender age. Even after getting a woman in his life, she still continued to take good care of him.”

“From a young age I knew there was something not quite right with Joelison. When he was a baby and only a few months old the baby shoes stopped fitting his feet properly and I’d always have to go and buy more and more. I thought ‘there’s something wrong here’ but the doctors said he was just a big baby and would stop growing eventually and so we waited for him to stop growing – but he still hasn’t stopped.” ”When he got to eight years old I knew he was growing at an abnormal rate and by the time he was 14 he was already 6ft 4in. Joelison Fernandes da Silva is 7 feet 8 inches tall while his wife is 5ft tall. We lived in the rural zone and nobody knew him. For half of his life he has been hidden away. If anyone came to our house he was so shy he would hide so they wouldn’t see him.
I was really worried.” 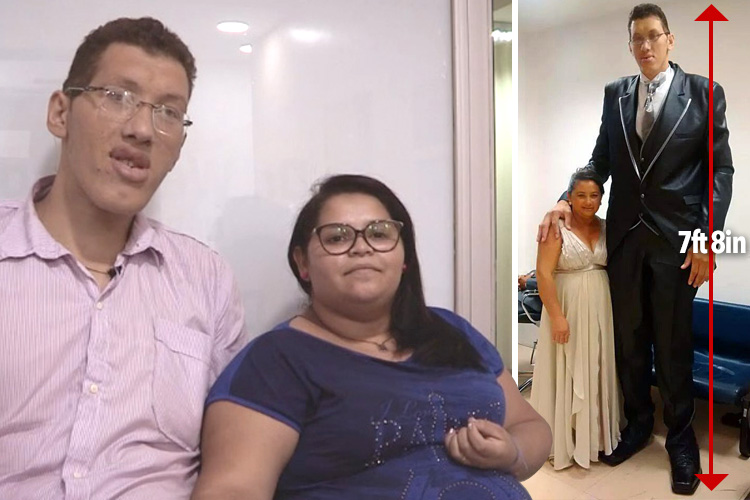 She added that she gets jealous knowing that her son she took care of will end up in another woman’s hands. ‘’I get really jealous because I dedicated my life to him,’ Ivanilde echoed. But, that’s okay now as she has adjusted. In order to control his growth, Joelison undergoes monthly injections. Joelison and Evem have lived happily since they got married although they are yet to have a baby.”

#Tallest Man Falls In Love With A Beautiful Small WomanRelationships