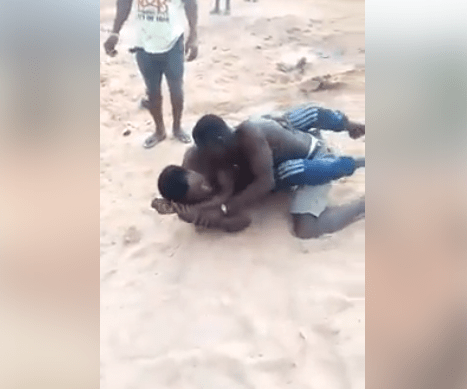 The effect of technology and social media can sometimes be at disadvantage as people were busy recording a video to post on social media while two adults were fighting themselves to death, A heated fight broke out between two friends and laborers after an argument recently in the eastern part of Nigeria.

It was gathered that the laborers were working on a building site before being involved in an argument over money, according to reports. The tensed argument later degenerated into a fight which saw them throw punches at themselves in public and even to the extent of tearing clothes and showing nakedness. While the clash was going on, other laborers who were present watched and allowed them to fight without any interference as they said anyone who injures himself will be wise.

Something that tends to be overlooked, in particular by young and fit men, is the potential brutal consequences of a street fight and just how extreme these can get. They’ve all seen videos of how a guy gets knocked out and then a few people step in before things get worse, thinking that’s how it goes. For sure, this happens. It happens a lot actually, in particular when you look at the typical dominance display and puff-up-your-chest fighting young, inexperienced men tend to gravitate towards. The critical mistake is thinking this is the only kind of street fight or violence that exists.

Do you think the young men did the right thing by leaving them without separating the fight?