VIDEO: See how Arsenal returned to winning ways with Luiz goal vs Bournemouth 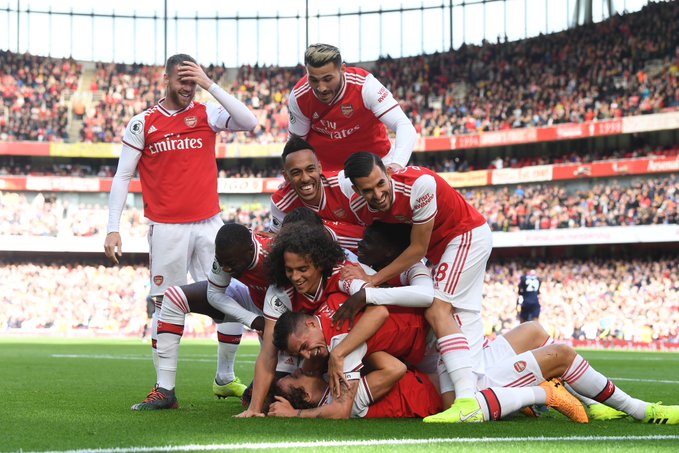 Arsenal bounced back from their 1-1 draw with Manchester United last week to grab a narrow 1-0 win over Bournemouth on Sunday at the Emirates.

David Luiz’s ninth-minute header proved to be the difference between the Gunners and the Cherries and Unai Emery’s side won all three points.

Arsenal’s indifferent start to the season surely has given many Gooners plenty of reasons to be apprehensive whenever the referee signals for kickoff in any of their games, in the Premier League at least. And that apprehension must have overwhelmed many of them when the referee signaled the start of this game.

The first five minutes lacked any highlight, further heightening that apprehension but it wouldn’t be for long as in the ninth minute, the ball was in the back of the net for a goal.

A corner kick found David Luiz, who jumped highest and tries his luck with a header from around the penalty spot. His effort was both strong and precise enough to go into the bottom left corner. 1-0 to Arsenal.

Then nine minutes later, Bournemouth had a glorious opportunity when Dominic Solanke leaped high to meet a beautiful cross into the box from the free-kick, and he planted a header from near the penalty spot which went a whisker wide of the left post. What a chance to level the score.

It was beginning to look like a rollercoaster of a game with both teams looking to grab the initiative and two minutes after that miss by Solanke, a short pass found Nicolas Pepe in acres of space on the edge of the box and he decided to go for glory. His efforts looked in for all the world but just crept past the left post.

The Ivoirian would go close twice again before the half time break, but none yielded a goal.

At the restart, the Cherries looked to level the score as they poured out more in attack and on 51st minute, Jefferson Lerma got into a great position in the box after a pass but sent his shot just wide of the left post.

However, after that chance, the game slowed as Arsenal looked to control possession and manage the game. However, tensed the Arsenal fans must have been, this will be a good win for them.