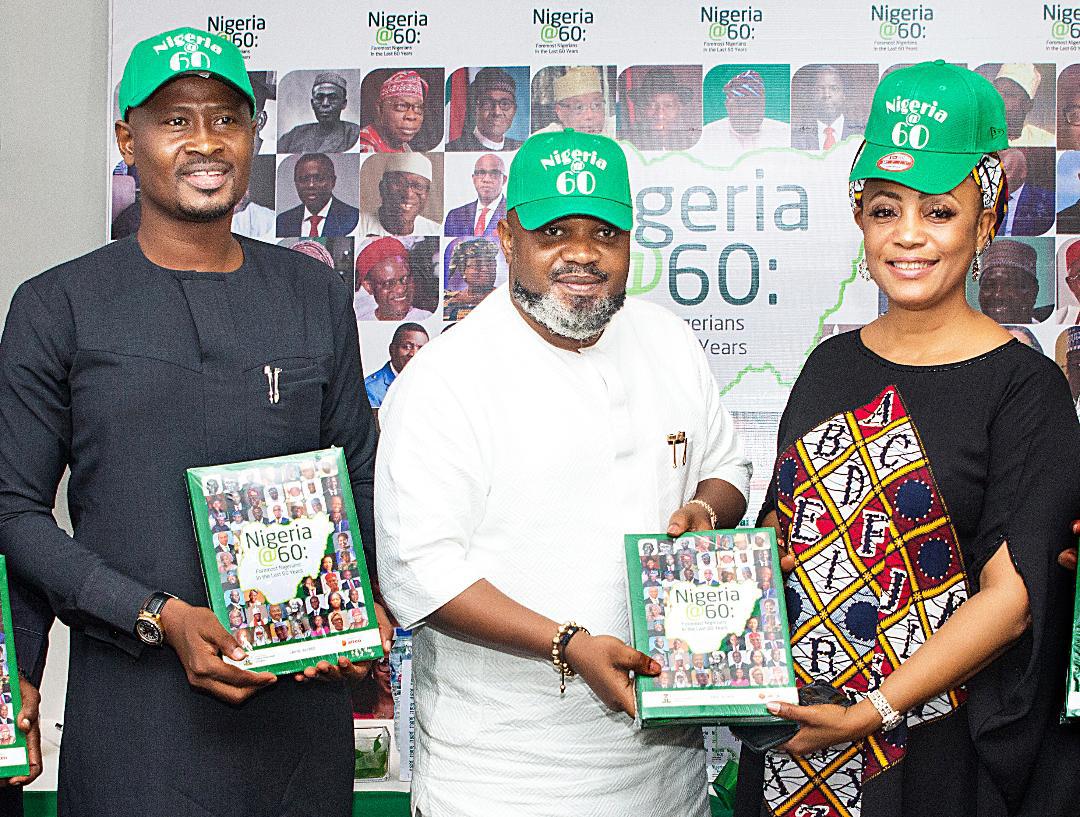 The all-colour, all-gloss book, which has been widely hailed by many prominent Nigerians as a worthwhile educative and historical work, is published by Alfred’s Old English Partners, publishers of the widely popular coffee table books; Titans…The Amazing Exploits of Nigeria’s Greatest Achievers; and Highlife – Lifestyles of Nigeria’s Rich and Famous; and biographies like Pacemaker – Triumphs of IghoSanomi at 40; The Lion of Afia Nsit – Triumphs of Scott Tommey at 45; Julius Rone…The Jewel of the Delta; and Dapo Abiodun…The Heart of Prince.

Speaking, Alfred said that he was motivated to write the book because, “One of the biggest errors of our heritage as a nation is the failure to properly and periodically document in enduring forms, significant events of our national history and the roles of the personages. Such an important document helps to prevent the distortion of the feats and facts of our heroes and leaders.”

He added, “Whether we want to believe it or not, Nigeria is a nation guilty of not keeping data, which has, over the years, led to the distortion of her history. Many of those who came before us, despite their monumental talents and achievements, refused to pass on to us lessons from their trajectories. Our generation is the poorer for it because many do not have a sense of where they are coming from or where they are headed.”

Alfred said he made up his mind long ago that whatever it takes, he would do everything to be on the right side of history by deploying his resources, experience and skills to documenting for posterity and today’s youth – who are bereft of quality role models – the inspiring exploits and attainments of Nigeria’s foremost citizens of the last six decades whose contributions have been of an immense boost to nation-building.

According to him, “This book captures a critical period in our 60-year history as a nation; and fills a long-abandoned vacuum by bringing out of the shadows of history a silent army of men and women especially those that had until now, been unacknowledged and under-represented, despite their contributions to the nation we now proudly call ours. Through the individual stories and exploits of our heroes past and present, we’re given an insight into the strength and stamina that they evince (d) in the face of a system geared against them.”

Endorsed by the Federal Government of Nigeria through the National Council for Arts and Culture, NCAC, the Director-General, Otunba Olusegun Runsewe, said the book is of significant historical and cultural value to this generation especially as Nigeria celebrates her 60th independence anniversary.

“This is a trans-generational effort that is in tandem with the Federal Government’s appreciation of the need for proper documentation in enduring forms, significant events of our chequered history and the roles of outstanding men and women who created the history.” Runsewe further said.

In his Prologue entitled ‘Enriching the History of a Giant’, former Senate President, Dr Bukola Saraki espouses Nigeria’s greatness which he agrees had been tested in several ways, adding that though Nigeria might not have fully fulfilled the aspirations of her citizens and the rest of the world, she has continued to play a major role in stabilizing her region and the continent at large. Thus, he says he welcomes any attempt to give a good account of Nigeria’s existence as an independent country in the last six decades.

“This book by Lanre Alfred, a journalist with many years experience, is definitely going to add fresh pages to the body of literature and biographical work on this great country. This unique attempt at recounting our national history also seeks to put on display the roles of the selected players in national development over the years. It also presents a challenge for those key players, who are alive to strive to improve on their roles while also giving the rest of the citizenry the opportunity to honestly and genuinely assess the account and the roles it ascribes to these individuals.”

The former two-term governor of Kwara State concludes that Nigeria will overcome her challenges and fulfil her manifest destiny because there are several ways of leading Nigeria out of the woods; “One way is the one Lanre Alfred has taken with this book; celebrating the nation’s birthday through a revisit of the role of some of the key players.”

The Ekiti State governor, Dr Kayode Fayemi, in the Foreword, writes that Nigeria is an amazing story and an evolving power whose destiny is far beyond the convulsive spasm that often diminishes the narrative of her undeniable glory. “This lesson is what has attracted the intellectual lens of Lanre Alfred in this insightful book. He takes us through an undulating labyrinth of the Nigerian story and points our attention to the mesh of our socio-cultural plurality, which ultimately makes ours a complex political experiment.

“(Alfred) depicts the nation’s foundational challenge as that of a sailing mission without a rudder and a flying expedition without a compass. For it was clear that, at independence, there was no consensus around vision, purpose and strategy for the actualisation of the nation’s dream.”

Like Saraki, Governor Fayemi concurs that the irony of the Nigeria story is that while her inadequacies are apparent to all, her progress is difficult to ignore either. “And this is the reality, which many critics and commentators have failed to factor into their evaluation of the nation’s trajectory. One of the ways to appreciate this progress might be to focus on the contribution of many compatriots, who have invested their God-given talent and creativity for the progress of the nation in the different segments of our national life,” he says.

Governor Fayemi says he is satisfied with Alfred’s optimistic approach to the appreciation of Nigeria because, “He has elected to gauge our progress in terms of verifiable and invaluable contributions of some individuals, who have greatly impacted the nation and whose contributions to her development since independence, are of immense significance.
“This approach is not only a commendable reward system; it is also an effective story-telling strategy that properly situates the nation’s milestones around the exploits of her heroes and heroines. To suggest that Nigeria has not made progress is to declare that the works of her heroes and heroines are in vain. It is to assume that, generally, nonentities had led the nation in politics, business, culture, religion and leadership!”

He also commends the efforts that went into putting the book together, saying, “Alfred has launched his fecund mind into a fertile territory that many people would have ignored. It is another demonstration of his depth, prodigious intellect and mastery of the nation’s story as a social commentator and chronicler. He has taught us a new lesson that nation-building is a collective responsibility and that a nation’s prosperity is the aggregation of the industry and prosperity of her citizens.”

Interestingly, however, Alfred announced that the book is especially dedicated to Dr. Mike Adenuga Jnr, the man popularly called ‘The Bull’ as a homage to his humanity and relentless strides at rewriting the African business narrative; for standing tall and wading through odds with the courage of a knight and confidence of a champion.

Hugely successful, yet, affectionately humble, ‘The Bull’ as he is widely known is one of those risk-taking individuals that struckout on new paths, rather than travel the worn paths of accepted success to prosper themselves and their society. He has proved over time that if sent to Mars, he would still treat it as a stepping stone to Saturn – the quality of constant invention and self-improvement that has earned him worldwide acclaim and prosperity.

According to Alfred, “Adenuga does not believe in impossibilities. With just tenacity of purpose and a terrier devotion to his dreams, he bestrides, successfully, the gap between creativity and commerce.He started from the scratch, but kept his nose to the grindstone and has turned many seemingly insignificant ideas into behemoth industries.The story of Globacom – how it has survived a myriad of odds including a hostile economy, harsh government policies and competition – remains his magnum opus”.
He added that he is proud to associate with Dr Adenuga’ssuccess in turning generosity, excellence and humaneness into an art form, adding, “In an era beleaguered by the infamy of the human species, Dr Adenuga’s handiwork unfurls as an undying tribute to mankind’s better nature. He challenged resolve with steely grit and exploited the arduous planes of ambition and toil, till he encountered grandeur at the crossroads where wild contemplation and hard work morph into triumph.”

Glo, proudly Nigerian company with the wellbeing of Nigerians the core of its business principle has positively impacted on the lives of Nigerians; giving many uncut talents a platform to harness their talents through its reality television shows; while gifting hundreds of lucky subscribers life-changing prizes through its promos and providing direct and indirect employments to millions of Nigerians. In the intervening years, Globacom has made home-grown stars from the entertainment industry the faces (ambassadors) of its brand, while making them worth their popularity in affluence and influence.