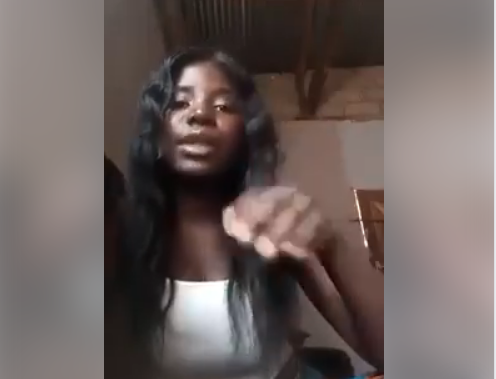 A 24-year-old lady has revealed the type of man she wants in her life. According to the young lady identified as Sarah, she would like to date a man who is tall, light and very handsome. She claimed that there’s no way she would settle for anybody who is short because ‘they are problematic’. The student also said she needs someone who is established with a stable job and can not tolerate someone who is black like her. The video below shows the moment the lady listed requirements in her type of man.

It’s true that some women are sexually attracted and open to dating a short man, but a quick poll of your friends—or any group of adults, for that matter—will quickly confirm just how stigmatized short men are in our culture. For reasons that betray logic, short men get the you-know-which end of the stick and are ostracized when it comes to partner selection. While this sexual preference—or prejudice?—is also at work in the dynamic of sexual attraction among gay men, I’ll focus on women here due to sheer numbers. Do women see short men as lepers? Not quite, though it does seem that most women feel that short men aren’t relationship material.

Having heard short men complain about their jeopardized status in the dating pool, you’ll find that short men believe that women see them as less than or deficient, as if models pulled off an assembly line because they don’t measure up to the others. If we conceptualize the dynamic along a continuum of developmental stages, it’s as if women see short men as awkward teens stunted in time, desperate at a school dance and relegated to the side wall. In short, it seems that somehow short men aren’t perceived as real men. Author and cultural commentator Bel Hooks refers to this fallacious, pumped up version of the real man as the kind of man who can “take action and break the rules.”

#Lady reveals the kind of man she can marry2dating