EXPOSED! Lagos Fine Boy Who Was Dating Two Beautiful Girls At The Same Time Caught On His Birthday By Them (Pictures) 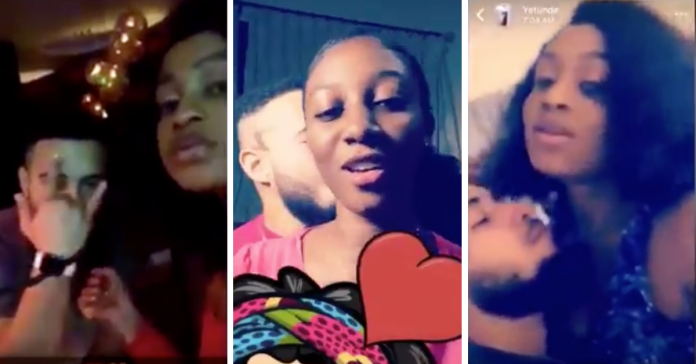 Well, the sad part is, each girl felt Fouad was dating just her and no one else, until the drama landed on Twitter where they discovered he had been playing all of them. So this guy has a girlfriend known as Gisela and another one known as Yetunde, and he has been cheating on them with each other. So in the minds of Gisela and Yetunde, they are dating Fouad, but this guy is a player, who was playing with both of them and the whole thing has exploded on Twitter.

In summary, as seen on Twitter: “The whole Gisela , Fouad, Yetunde thing be say ; Gisela come post video of ein fine boy(Nana Fouad) on his birthday, everything nice and hype norr boys go pull video of the same guy for another girl ein status chopping love and all that. Now everywhere beans.”

In all of this brouhaha love would reign! #Gisela would be wearing the last laugh! Ring-Gown-Babies! #Fouad may get a second chance and our comments would make no sense! That's how love teaches a stupid lesson. Still rooting for #Gisela though! #Yetunde was stealing from us. pic.twitter.com/Ze8INPptI0

And Trust Twitter to come with the trolls, see some of them below:

In these shots, Fouad aims his nostrils at his prey's neck, right under the mandibula. During this process, he exhales carbon dioxide and activates the nerve endings in the neck to transmit euphoric messages to the limbic system. The girls all fall. pic.twitter.com/3HCBGgFxUt

Fouad and that Yetunde girl have been banging since last year..Gisela should stop proving she's hardcore.Epain am pic.twitter.com/TW0oE7Y3bx