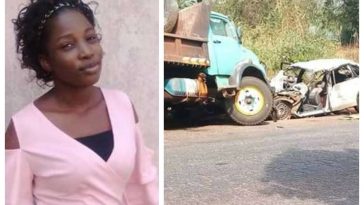 This is sad. A young lady was killed in a fatal accident while heading to the court on Wednesday, December 16th
The deceased identified as Miss Promise Ezekiel of Brave Heart Initiative (BHI), who hails from Benin, Edo state, was following up a rape case in the court, when she was involved in a fatal accident which killed her alongside the rape victim, according to Nkechi Ugochukwu, who described her ‘as a heroin in the struggle’ in a social media post earlier today.

Reacting to the ugly situation, Prince Chukwuemeka Uba, the National President of Ohanaeze Youth Foundation, Nigeria, OYFN, has challenged the Commissioner of Police, Edo State, to launch a thorough investigation aimed at unraveling the remote cause or causes of the auto crash, believing there is more to that incident, bearing in mind a rape case was involved.

According to him, the police could begin by profiling the person involved in the rape issue, towards ascertaining his past on such case or any other criminal matters. Friends of the deceased have taken to Facebook to mourn the loss.

What are your thoughts on this? Kindly leave a comment