MAN POWER! An Energy Drink That Makes Erection Last For 6 Hours Has Been Discovered 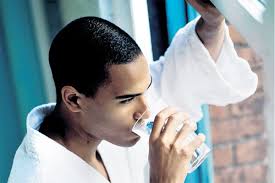 Well, this may come as a surprise but its true. An energy drink like no other has been discovered in Africa and many men have seen this breakthrough as a significant one in the health sector.

This was disclosed by the National Drug Authority (NDA) in Uganda, which said it had tested samples from a bottle of the drink – Natural Power SX – after a man complained of an erection lasting nearly six hours, constant sweating, and abnormal heartbeat.

Zambian authorities have since halted the production and distribution of the drink pending investigations. In a joint statement cited by the BBC, the Zambia Medicines Regulatory Authority, the Ndola City Council and the Zambia Bureau of Standards said: “Officers from the three institutions are on the ground to collect samples of the raw materials and of the finished product for analytical tests that will determine if there is any truth to the claims being made. “The outcome of this investigation will be communicated to the public as soon as results are released,” the statement added. Meanwhile, the drink is being confiscated in Uganda while the manufacturers have denied claims that their product contains any drug for erectile dysfunction.

Sildenafil is known by most as Viagra. This little blue pill has greatly enhanced the quality of life of men suffering from erectile dysfunction. What many people do not know is that sildenafil can also be used to treat pulmonary hypertension, heart disease and altitude sickness. It is important to note that because of its mode of action, men who are taking nitrates should not use sildenafil.

Apart from large amounts of caffeine, most energy drinks contain added sugars; vitamins, such as B vitamins; and legal stimulants, such as guarana, a plant that grows in the Amazon; taurine, an amino acid that’s naturally found in meat and fish; and L-carnitine, a substance in our bodies that helps turn fat into energy, reports the CNN.

Although energy drinks have become popular among people, the World Health Organisation has warned that excessive intake “may pose danger to public health.” A team of researchers from the WHO have suggested several actions to minimize the potential for harm from energy drinks: Establishing an upper limit for the amount of caffeine allowed in a single serving of this type of drinks in line with available scientific evidence; Regulations to enforce restriction of labelling and sales of energy drinks to children and adolescents; Enforcing standards for responsible marketing to young people by the energy drink industry; Training health care practitioners to be aware of the risks and symptoms of energy drinks consumption; Patients with a history of diet problems and substance abuse, both alone and combined with alcohol, should be screened for the heavy consumption of energy drinks;

Educating the public about the risks of mixing alcohol with energy drinks consumption; Further research on the potential adverse effects of energy drinks, particularly on young people. This should be good news for men struggling to keep an erection. What do you think guys? Drop a comment below.