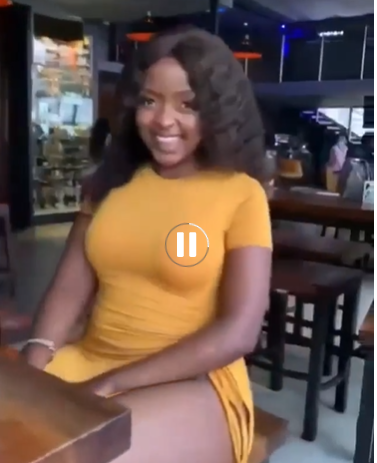 Less than a week after a seemingly drunk slay queen bared all her ‘goodies’ for onlookers, another young lady has left viewers eagerly stretching their necks to catch a glimpse of her ‘goods’ in a viral video. The location is 40Forty Lounge, a high-end entertainment joint in Westlands, Kenya which is notorious for such videos showing almost nude or skimpily dressed club goers. The club is also a well-known location where ladies flock to hunt for middle-class meŋ with money to throw around.
Most ladies turn up at the popular club in a dressed-to-kill attire that exposes themselves to anyone interested to see. The slay queen was rocking a figure-hugging mustard dress with a long slit, exposing herself to anyone interested to see. Her ‘goods’ were exposed to the revelers in broad daylight as she continued to party hard.
Looking at the viral video, she was enjoying the attention that she was getting in the club.
Watch the video here