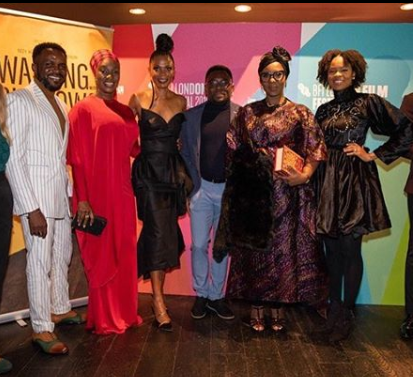 The movie produced by her production company, OYA Media, in collaboration with The Initiative for Equal Rights (TIERs), began premiering on Wednesday and will continue on Thursday. Directed by British filmmaker, Aoife O’Kelly, Walking with Shadows, stars Funlola Aofiyebi-Raimi, Ozzy Agu, Zainab Balogun and Funsho Adeolu among others.

The movie is a screen adaptation of a Jude Dibia novel published in 2005. It follows Adrian Ebele Njoko, a married executive whose sexuality is exposed by a disgruntled colleague causing an impact on his family.

Speaking about the premiere, Funmi Iyanda said: “Through the unique way the plot unfolds, the film fully explores many pressing societal issues and promotes the importance of self-discovery and acceptance in a cultural society. It is an honor to premiere this movie at one of the most prestigious film festivals in the world. We are definitely thrilled by the opportunity to share this with the international community and hope they are inspired by it as much as we are.”

The movie will premiere in Nigeria on a date to be announced. BFI London Film Festival was founded in 1953 and holds in the United Kingdom annually with cooperation from the British Film Institute.