WEIRD!! 5 shocking traditions around the world – Three brothers can share a wife in No.3 (Pictures) 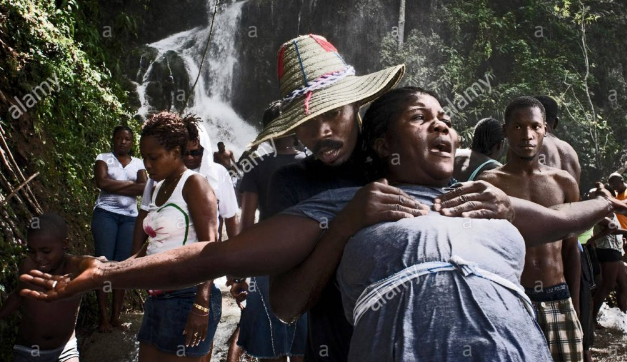 From a tribe of semen-drinking men to the community of brothers sharing a wife, amaze yourself with these 10 shocking tribal s*x traditions from around the world.

To become a man in this primitive tribe, boys are removed from the presence of all females at the age of seven, living with other males for ten years. During the ten years, the skin is pierced to remove any contamination brought upon by women. For the same reason, they also regularly incur nose-bleeding and vomiting caused by consuming large amounts of sugarcane.

To top it off, they are required to ingest the semen of their elders, which is thought to sustain growth and strength. When they are finally introduced back into the tribe, they continue to engage in nose-bleeding at the same time as their wives’ menstrual cycles.

2. Saut d’Eau: The city where you may witness rituals of voodoo and love

If you travel to Haiti and visit the waterfalls of Saut d’Eau during the month of July, you may witness quite a risqué ritual. Voodoo practitioners make this journey each summer to worship the goddess of love. Pretty normal stuff, right?

3. The Nepalese: A community where brothers share a wife – The Himalayas

According to an article in Psychology Today, “Almost all of the few polyandrous societies practice what anthropologists call fraternal polyandry, where a group of brothers share a wife.” This is the case in the Himalayas, where there is little land available for farming and agriculture, and families with more than one son would be faced with dividing up their land were each son to start his own family.

The solution? Find one wife for all of their sons so that they can live together as one family and keep their family plot intact. Also, as told in the National Geographic documentary Multiple Husbands, this arrangement works best when the wife is adept at “scheduling” time with each brother.

4. The Wodaabee: The tribe were men steal each other’s wives – Niger

In the Wodaabe tribe of Niger in West Africa, men are known to steal each other’s wives. The Wodaabe’s first marriage is arranged by their parents in infancy and must be between cousins of the same lineage. However, at the yearly Gerewol Festival, Wodaabe men wear elaborate makeup and costumes and dance to impress the women – and hopefully steal a new wife.

If the new couple is able to steal away undetected (especially from a current husband who may not want to part with his wife), then they become socially recognized. These subsequent marriages are called love marriages.

5. Ancient Egyptian Pharaohs: The pharaohs who would practice public mas-tur-bation

The ancient Egyptians were so inspired by the act of self-stimulation that at the festival of the god Min, who represented Pharaoh’s sexual potency, men masturbated in public.