OMG! Davido’s Baby Mamas Just Formed A New Team; See What They Were Spotted Doing Without The Singer 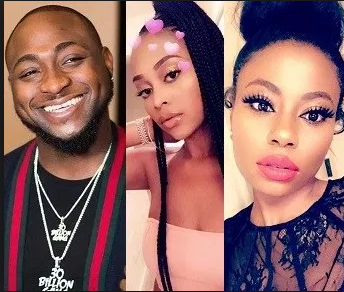 Rather rare photos of singer, Davido‘s two baby mamas, Sophie Momodu and her daughter, Imade as well as Hailey and her mum has been shared on the former’s Instagram page. During his concert at the Eko Atlantic yesterday, the singer brought out his two lovely daughters, Imade and Hailey on stage as he told his fans to say ‘hello’ to them. Apparently, the baby mamas had a link up after the concert and it was then these lovely photos were taken. Check them out below

It seems these two have found a way to make thungs right between them. Recall that the duo had snubbed the singer on his 26th birthday a month ago. Social media was agog with birthday messages from friends and well wishers who shared lovely pictures of the singer to appreciate him on his day. However, one thing that didn’t go unnoticed is that Davido’s baby mamas ignored him on his special day. Going through the Instagram page of his first baby mama, Sophia Momodu, one can notice that she didn’t post any picture or message to appreciate the father of her baby Imade.