Were fellow celebrities happy for Wizkid’s Ciroc deal? See how they reacted! 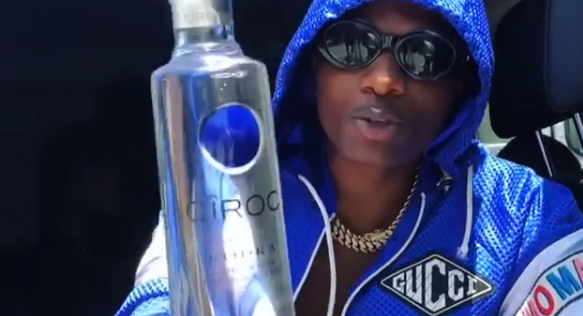 Congratulations to Wizkid on his Ciroc deal! Last night, the singer took to his Twitter to reveal that he has bagged a major deal with one of the world’s finest vodkas company, Ciroc. “New Deal Alert! Officially with CIROC!!! Lets get it!! Big bag alert!” said Wizkid, before encouraging his fans to “#DrinkResponsibly”

The news traveled fans and drew responses from his colleagues and partners, like Cassper Nyovest, all of whom are wishing him well in this new journey.

Check out some of the reactions below.

Congrats bro ? only way is up! https://t.co/MnxGH7FqUL

Nigerian music sensation Wizkid has signed a deal with Ciroc, a brand of eau de vie vodka.  Wizkid made the announcement on his official twitter account while advising people to drink responsibly.

The ‘Soco’ crooner kept his fans anticipating the ‘Big Announcement” for over a day before revealing the details about his new deal.  @wizkidayo “Big announcement in 24hours”. Prior to the ‘Big announcement’ Wizkid  expressed his pride in the effort his team put into accomplishing the deal, while claiming to have been working on the deal for several months.  @wizkidayo “We been working on something crazy for months! Its time”.

Wizkid credited his success to God and thanked his business partners for their support. “It’s God blessing me.  “Big shoutout to all my business partners, “Big up Nike, Pepsi, Dolce & Gabbana, my family forever”. Recently Wizkid met American rapper, record producer and entrepreneur Sean Combs a.k.a Diddy who expressed his desire to come ‘back home’ during the meeting.

Notably, the marketing and promotions of Ciroc is being handled by Diddy in an equal-share venture with profits from the brand being split between himself and manufacturing partner. On his visit to the United States, Wizkid has also been seen in the company of superstars such as  DJ Khaled, producer Metro Boomin and singer Fergie. While in London, the music artiste was spotted hanging with Drake in a viral picture. The 28-year- old recently sold out the O2 hall in London, and is set to release a much anticipated album ‘Made In Lagos’ later in 2018.