VIDEO: Davido sings Chioma’s praises as she cooks for him and his team 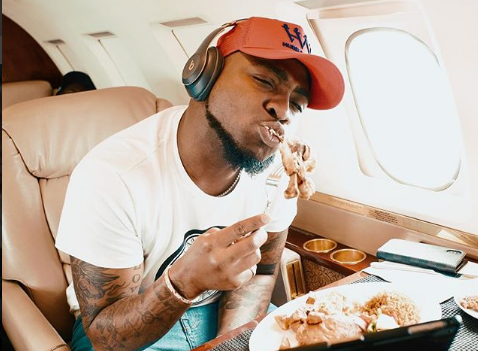 Many young men will pray for the life of singer Davido at the moment. The 25-year-old Fall crooner recently purchased a N94 million Bentley Bentayga and took it on wild ride to test the capacity of the sports utility vehicle. As if driving fast cars is not enough, the singer gets well-fed by his aspiring chef girlfriend, Chioma. Recently, he showed off the love of his life cooking himself and his team a sumptuous meal and indeed, proving that she’s a wife material.

You put a brother in the mood ?

Although there’s been news that Chioma is a school drop out and is not on good terms with her family for quitting school and following her boyfriend to different cities in the world, she’s earned points for being a good girlfriend and trying to build a great career from her cooking passion.

Chioma Avril is currently under attack after reports claiming she dropped out of school because of her millionaire boyfriend Davido surfaced online. Her fans since the reports have been throwing shades at the 23-year-old, calling her names and suggesting that she is acting irresponsibly. Reacting to the rumor, the chef took to her Instagram page to shun her fans saying if they are unsure of a story they should shut up.

According to Vanguard Ripples, a reliable source revealed the story and the report also has it that the chef’s family members are not happy with the new development. The report says; “That Chioma’s father, who is a devout Seventh Day Adventist is not particularly pleased that his daughter has not been serious with her studies. Chioma who gained admission into Babcock University (a Seventh Day Adventist school) to read economics in 2012 is yet to graduate, when she should have completed the course since 2016.

Chioma, once skipped a whole session because she was travelling around with Davido and had to defer her studies. For months now, she has not been attending classes. I can’t even remember the last time she was in school. The last thing I heard from her friends in school is that she’s not interested in coming back to Babcock. She’s traveled out of the country again and it doesn’t look like she’s coming back.

The Love of my life !! Can’t wait to spend forever with you ❤️❤️

A friend confessed to me that she told her she’s not coming back to Babcock, said a source who wouldn’t want her name in print. It was further gathered that her father has had a strict talk with her that she must finish school before embarking on any marriage plans. The devout Seventh Day Adventist parents are said to be pained about their child treating her celebrated love affair with the superstar singer as top priority over her education. It is public knowledge that Chioma and Davido are already living like they are married. Wherever there’s Davido, Chioma is sure to be there.