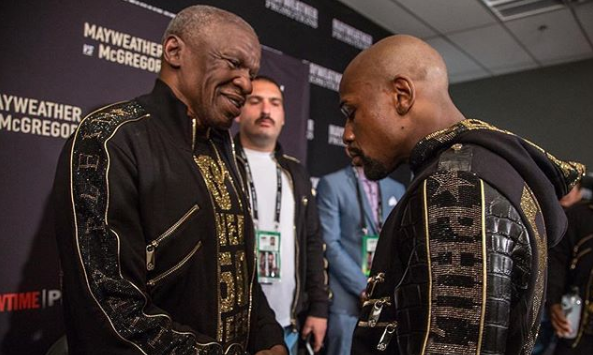 Floyd Mayweather Jr. now has a new stepmum. According to reports, the retired boxer’s father, Mayweather Snr., and his partner, Lois Ann Roberts tied the knot in Las Vegas back in February.

“Floyd and Lois Ann Roberts hit up the Stained Glass Wedding Chapel in Vegas on February 4 and swapped “I Dos” in a very quick and quiet ceremony,” said a source to the media house. The source further added that Mayweather Jnr. was not present at the event, however he approves of the new stepmum, that they have known each other for decades.

This comes barely a month after news surfaced that Mayweaher Snr. fathered a child with a woman named Purisa Farris. He had been in a paternity suit with Farris who had filed for child support earlier in the year. He was forced to take a DNA test in April, and the result showed that the probability of paternity is 99.99%.

Floyd Mayweather Snr is an American former professional boxer who competed from 1974 to 1990, and has since worked as a boxing trainer. Fighting at welterweight during the 1970s and 1980s, Mayweather Sr. was known for his defensive abilities and overall knowledge of boxing strategy. He is the father, and former trainer, of undefeated five-division boxing champion Floyd Mayweather Jr.

Younger brother Roger was WBC super featherweight and super lightweight champion and was known for his defensive skills. The youngest brother, Jeff, held the IBO super featherweight title. Floyd Mayweather Sr. is known for his outspokenness. He frequently recites poetry about his opponent and still does today for his fighter’s opponent. Some refer to him as the “poet laureate of boxing.” He is a flamboyant dresser who wears colorful suits, ties and shoes to news conferences.

#Mayday #MayweatherSr He said he can get the job done officially stamped. ??????????? #tmt #moneyteam ????? @floydjoymayweathersr @floydmayweather

As a trainer, Mayweather preaches defense and a stiff jab. He teaches many of his boxers a defensive technique known as the shoulder roll, in which the fighter uses his front shoulder to deflect blows and limit their impact. He has on many occasions, including HBO’s Mayweather-Hatton 24/7, claimed to be “Floyd Joy Mayweather Sr., ‘The Greatest Trainer of All Time'”.

My brother Jeff & I have to always compete at something… @jeffmayweather

He is the former trainer of top light heavyweight Chad Dawson, former two division champion Joan Guzmán and women’s champion Laila Ali. He is well known for his stint as Oscar De La Hoya’s trainer from 2001 through 2006. He said he would train De La Hoya for his May 5, 2007, fight against his son, but demanded a $2 million fee to do so. After considerable deliberation, De La Hoya opted not to hire Mayweather Sr. and announced on January 30, 2007, he would use Freddie Roach instead.

The snub briefly reunited father and son, with Floyd Sr. turning up at the Mayweather Jr. boxing gym, while Roger (who had been banned from being in the corner at boxing matches for 12 months for starting a riot during Floyd Jr.’s bout against Zab Judah on April 8, 2006, when he attacked Judah) served six months in jail for a domestic assault. But when Roger was released, the situation became awkward because of the brothers’ rivalry. He also spent five years in a federal prison for convictions for violating drug trafficking laws.

Floyd Jr. chose Roger as his trainer and Floyd Sr. left again, claiming that the father-son relationship was “back to square one” for choosing Roger over his own father again. Floyd Sr. agreed to once again train De La Hoya in anticipation for Mayweather Jr. – De La Hoya II presented by Golden Boy Promotions. However, due to disagreements with how revenues would be divided amongst the two fighters, the bout was cancelled. Mayweather Sr. trained Manchester’s Ricky Hatton for seven weeks prior to his bout against Paulie Malignaggi on November 22, 2008 at the MGM Grand in Las Vegas.

Hatton retained his IBO light welterweight title with a technical knockout in the 11th round. However, Hatton lost only his second fight under Mayweather Sr. with a second-round knockout by Manny Pacquiao. The famous feud between Floyd Mayweather Sr. and Floyd Mayweather Jr. finally came to an end as father and son made up before Jr.’s return to the ring after a 21-month lay off. However Jr.’s uncle Roger Mayweather still trains Jr. On the HBO 24/7 program Floyd Mayweather Sr. was quoted as saying ‘I don’t need to train my son, I need a relationship with my son.”

#Repost @jeffmayweather with @get_repost ・・・ Wonderful night, great night with my family and friends

A proposed March 2010 fight between Mayweather Jr. and Manny Pacquiao fell by the wayside in January 2010 when the camps representing both fighters could not agree on a timeline for drug testing for the fight. A more stringent drug test was sought by Mayweather Jr.’s representatives due to inadequacies in the current testing standards and a suspicion that Pacquiao might be utilizing banned performance enhancers in his training regimen.

#Repost @iamkevinwong with @get_repost ・・・ " There's This One Person That We Must Give Thanks To, And That's My Father " – @FloydMayweather Photo ? By | @iamKevinWong Bookings ✉️ info@iamKevinWong.com

Mayweather Sr. had been very vocal about his theory that Manny Pacquiao’s impressive displays as a welterweight were aided by performance-enhancing drugs for several months prior to the negotiation for a fight between his son and Pacquiao. On March 21, 2011, U.S. District Judge Larry Hicks said Pacquiao had sufficient evidence to continue his lawsuit that alleged Floyd Sr., Floyd Jr., and Roger acted with malice by accusing the Filipino boxer, and as of December 2011 Jr had been deposed and the case was continuing seeking damages of $10 million.

Mayweather trained UFC fighter BJ Penn for two weeks. In May 2013, for the first time in 13 years, Floyd Jr. announced that Floyd Sr. would return as his trainer against Robert Guerrero. While some speculated this was because of the bloody nose Jr. got in an otherwise dominant performance against Miguel Cotto (a change to the more defensive oriented Floyd Sr. over the offensive Roger was seen as logical), Floyd Jr. cited his uncle Roger’s health issues, diabetes, and poor vision as rationale for the change. Sr. has remained the trainer of Jr. ever since and trained him to victory in his fight over Manny Pacquiao