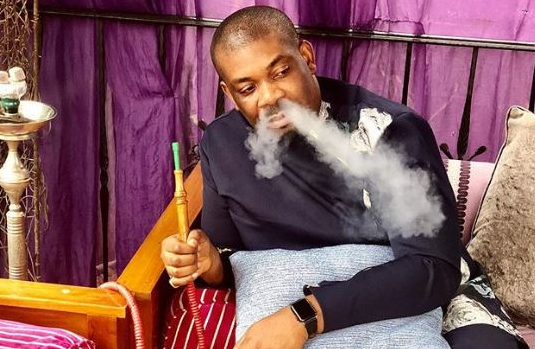 Mavin Boss Don Jazzy who went on a cash sharing spree with his fans on Twitter few days ago, Just shared a photo of himself living the Life with Sisha, He shared it seconds ago. The picture shared by the Marvin Records boss attracted a plethora of comments from fans who reacted to the act.

Check out fans reactions below:

Don Jazzy, is a Nigerian record producer, singer, songwriter, and entrepreneur. He co-founded the now defunct record label Mo’ Hits Records in 2004. Following the closure of the aforementioned record label, Don Jazzy set up Mavin Records on May 8, 2012.

Final about to start. I predict that somebody must win. What’s your own prediction? #Worldcup #france #Croatia.

Ajereh was born in Lagos State. His family lived in Ajegunle, Lagos where Ajereh was raised. He was educated at the co-educational high school, Federal Government College Lagos. Ajereh found an interest in music early in life and at age 12, began to play the bass guitar. He also gained knowledge of traditional and percussion instruments. Ajereh enrolled in business management studies at the Ambrose Alli University, Ekpoma, Edo state.

In 2000, Ajereh visited London. His uncle had invited him to play the drums for the local church. In London, Ajereh gained employment at McDonald’s as a security guard. He continued his interest in music, associating with Solek, JJC, Kas, The 419 Squad and D’Banj. Ajereh learnt producing skills from Emeka Infiniti at O-Town record company.

In 2004, Ajereh collaborated with D’Banj to form Mo’ Hits Records. In the next two years, Ajereh produced the albums No Long Thing and Rundown/Funk You Up. A third album, Curriculum Vitae, had also been started. Around this time, Ajereh developed a recognisable introduction, “It’s Don Jazzy Again!”

#TBT to when I was learning how to cross leg.

In 2008, Ajereh was credited in the production of The Entertainer by D’Banj. He also contributed to the production of Wande Coal’s Mushin 2 MoHits, an album that was described as one of the best albums to ever come out of Nigeria.

Although Ajereh did not take credit as a singer, he performed background vocals for artists he produced. These performances include vocals for D’Banj, Sauce Kid, Dr SID, Ikechukwu, Kween, D’Prince, Jay-Z. Ajereh provided vocal performance for Kanye West’s song Lift Off with Beyoncé on the Watch The Throne album.

In 2011, Ajereh was employed by Kanye West as a producer at Very Good Beatz. Ajereh worked with Jay-Z and Kanye West on the production of Lift Off, featuring Beyoncé on the album Watch The Throne which was released on 8 August 2011. In March 2012, Don Jazzy and D’Banj abandoned their partnership citing artistic differences.

On 7 May 2012, Ajereh announced a new record label, Mavin Records. Ajereh said, “I see Mavin Records being the power house of Music in Africa in the shortest possible time.” On 8 May 2012, he released an album featuring the artists signed to his label. The songs on the album included: Amarachi, Forever, Oma Ga, Take Banana and Chocolate, YOLO and the anthem I’m a MAVIN. Mavin records signed the vocalist, Tiwa Savage. Ajereh built a social network platform called “Marvin League” to complement and market his label.

Father lord once again you have shown us not to trust the predictions of pigs, cats and even octopuses. Our players played really well and I am proud of them still. Our country has been through a lot in recent times ?. But we must persevere and look to the future. We are the future and it’s in our hands. My people let’s go get our PVC’s to secure the future we all deserve. ????

On 5 November 2013, Ajereh had conflict with an artist, Wande Coal who left the label two days later. In September 2014, Ajereh produced a Nigerian social activist song with Reekado Banks and Di’Ja called Arise.

At the Headies Awards 2015, Ajereh argued with Olamide. The two disagreed about who should have won the “Next Rated” award. Lil Kesh of YBNL records lost to Reekado Banks, Ajereh’s artist. The winner of the award received a car. Apologies on both sides were posted afterwards