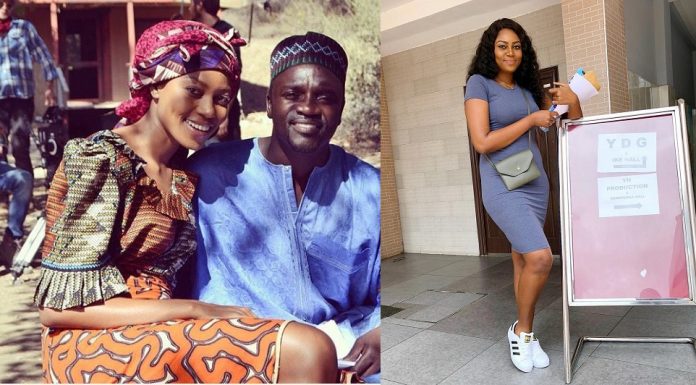 American singer, songwriter, businessman, record producer Aliaume Damala Badara Akon Thiam, better known as Akon, was pictured on set of a new movie with Ghanaian actress Yvonne Nelson. According to report, the movie is a big project which projects the image of Africa. This is evident in the costume worn by both parties. Yvonne Nelson took to her Instagram page and share the photo of her and Akon with a smiley caption.Yvonne Nelson’s native wear is reminiscent of what African mothers wore in the 90s. Akon on the other hand looks like a typical northerner.

A former Miss Ghana contestant, she bust onto the movie scene with big-screen roles in Princess Tyra and Playboy. Yvonne Nelson quickly became one of the “it” girls in the Ghanaian Movie Industry. After a short hiatus, Yvonne proved her versatility as an actress by starring in the movie Girls connection and Crime to Christ.

Yvonne hails from Cape Coast in the Central Region. She had her basic education at St. Martin De Porres in Dansoman where she currently resides. She then continued to Aggrey Memorial High School. She is now in her third year at the Central University College reading Human Resource Management. She is also into designing. Her colours are pink and black.

However, her call into movie line, she indicated, was not a dream come true. “I never dreamt of becoming an actress. I had no interest in it. I was rather into music. Back at Aggrey Memorial I used to rap on stage. Anyway, I am not surprised I am into acting since it’s all about showbiz.” In 2005 Yvonne partook in Ghana’s prestigious pageant – Miss Ghana – but could not a clinch the crown. She sprung onto Ghana’s rising Ghollywood after playing a supporting role in the movie “The Return of Beyonce” which featured the likes of Van Vicker, Jackie Appiah, and Nadia Buari among other top stars.

“I never went for an audition for movie. I was just going to have lunch somewhere one afternoon and there was an audition going on. So the producer saw me and was like ‘are you here for the audition?’ And I said no. He asked again ‘are you sure?’ I said yes, but he later managed to get my number and called me. So I thought ok let me try my hands on it. That is how it started. I have not regretted it. I have no regret,” says Yvonne.

Before then she had auditioned at Farmhouse for a TV series called ‘Fortune Island’. That series however delayed as it did not come out till she went into mainstream acting. Her first lead role in a movie was in Princess Tyra, which shot her to fame. Within a period of two-and-a-half years she had starred in over twenty (20) movies.She has also starred in Crime to Christ; To Love and To Cherish with Genevieve Nnaji; Festival of Love; Local Sense; Golden Adventure; Tears of Womanhood; Keep My Love; Girls Connection; Princess Tyra; and The Return of Beyonce.

Aliaune Thiam, is best known by his fans simply as Akon. Born on April 30, 1973 to legendary percussionist and jazz musician Mor Thiam whose expertise for playing the Djembe, a traditional African drum, has been touted as “unrivaled,” he was grateful for his family musical background that later on did helpful in paving the way for him to embark on a musical career and gain success in the industry, making him one of the icons in the 21st century. Born in St. Louis, Akon grew up in Senegal before he and his family returned to the United States and settled in New Jersey when he was seven. While in Jersey City, he discovered hip-hop for the first time by the time he started hanging around with local thugs crowd. Initially attended Snyder High School, the boy did everything against the school regulation and was kicked out after busted for selling guns, bullet and test questions for every test. He later on attended the Bayonne High School though. Hanging with the group, Akon also became popular for his bravery in fighting and was jailed for armed robbery and drug distribution charges. In between time, he used his time to begin writing his own songs.

Being brought up in an environment that treasures the true artistic value of musicianship and revels in the mastering of instrumental skill, it was Akon’s deep rooted love and passion for music that later on encouraged him to record tracks in a home studio upon being freed from behind bars. The tapes found their way to SRC/Universal which eventually released Akon’s debut LP “Trouble” in June 2004. It was this set that catapulted him to international stardom, thanks to the hit single “Locked Up,” written based on his experience of serving a three-year jail sentence for grand theft auto, that brought him a Sixshot Award for Best Single of 2004, shared with rapper Styles P. The other hit singles spawned by the album include “Lonely,” which was actually Bobby Vinton’s old track entitled “Mr. Lonely,” that successfully topped the UK charts in 2005, “Belly Dancer (Bananza),” “Pot Of Gold,” and “Ghetto”. “TROUBLE evolved from the struggles I went through and what I did and am still doing to correct those things,” Akon said about his debut album.

In 2005, Akon gained more popularity after being featured in Young Jeezy’s debut album, “Let’s Get It: Thug Motivation 101”, on the song “Soul Survivor” which became a top five hit on the Billboard Hot 100. In perhaps the best effort he had, sophomore album “Konvicted” that was released on November 14, 2006, raised his fame meter even higher, made it enough for him to be considered one of the prominent musicians at that time. Its first single “Smack That,” featured Eminem in the rapping, shot to #2 in Billboard Hot 100 chart and stayed on the post for five consecutive weeks. “I Wanna Love You”, the second single off “Konvicted,” was released in September the same year. Featured a collaboration with Snoop Dogg, this single topped the U.S. charts for two consecutive weeks, earned Akon’s his first number-one single on the Billboard Hot 100, and Snoop’s second. The first two songs may be lifted due to the collaboration, but Akon proved that his solo effort “Don’t Matter” could also reign at #1. Akon, indeed, reached the highest peak of his career with his being nominated for Best Rap/Sung Collaboration at 49th Annual Grammy Awards for “Smack That.” Unfortunately, he lost to Justin Timberlake/T.I. collaboration in “My Love.”

While thriving with his solo career, Akon was also noted for his collaboration with Gwen Stefani in her hit “The Sweet Escape.” Before touring as a solo, he jumped in Gwen’s Sweet Escape Tour in the first half of 2007. At one point, unfortunately, Akon was heavily criticized after performing racy dance with an underage girl during a concert in Tobago. Claimed to have no idea for the girls’ age that manipulated the venue, a nightclub only allowing 18 years and above, he took the “blame” anyway and wrote a song “Sorry, Blame It on Me,” released it in August 2007 and shot its music video at the same time. Since the song was created after “Konvicted” has hit the street, a special edition of the album was made with the inclusion of “Sorry, Blame It on Me.” Titled “Konvicted (Deluxe Edition)”, the set was released on August 28 the same year and covered in it the song “Rush,” featured Kardinal Offishall, which appeared in the blockbuster movie “Rush Hour 3” (2007).

Another day, another show ??? #KonvictKartelTour

On June 3, 2007 Akon was performing on stage during a concert at radio station WSPK’s KFEST in Fishkill, N.Y. when someone in the crowd of concert goers suddenly threw an object at the stage in his direction. He then asked the crowd to point out the individual who did that and ordered security to bring the audience member on stage. Once the attendee, a 15-year-old boy, was on stage, Akon tossed him back into the crowd from his shoulders. Video of the incident was reviewed by Fishkill police who at last decided to charge him with misdemeanor endangering the welfare of a minor and second-degree harassment. A December 3 arraignment, nevertheless, saw Akon being pleaded not guilty to both charges, much to his delight.