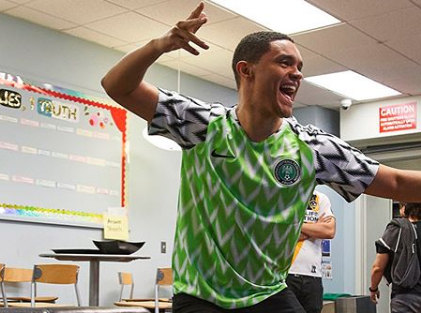 The host of America’s late-night TV program “The Daily Show” has drawn the ire of France’s ambassador to the US after joking that “Africa won the World Cup.” Earlier this week Trevor Noah, a prominent comedy host in the United States, praised “Africa” for its World Cup victory, considering the immigrant heritage of many of the French squad’s players and their families. The joke triggered controversy in France, with some social media users accusing the comedian Noah — a South African born to a black mother and white father — of racism. French ambassador to the US Gerard Araud on Wednesday sent Noah a stern letter criticizing the joke, saying “nothing could be less true.”

“The rich and various backgrounds of these players is a reflection of France’s diversity,” Araud said. “Unlike in the United States of America, France does not refer to its citizens based on their race, religion or origin.”

“To us, there is no hyphenated identity, roots are an individual reality,” the ambassador continued. “By calling them an African team, it seems you are denying their Frenchness.

“This, even in jest, legitimizes the ideology which claims whiteness as the only definition of being French.”

Shortly after the letter was posted on Twitter, Noah volleyed back: “When I say they’re African, I’m not saying it as a way to exclude them from their Frenchness.”

“I’m saying it to include them in my African-ness. I’m saying, ‘I see you, my French brother of African descent.”

Noah acknowledged that far-right groups in both France and the United States use the principle of heritage as a “line of attack” against immigrants to justify exclusion.

But he explained that he found it “weird” to suggest the players couldn’t simultaneously be African and French.

“Why can’t they be both?” he said to applause. So what they’re arguing here is, in order to be French, you have to erase everything that is African?”

Saying that he “vehemently” disagreed with that notion, Noah appeared to double down on his original message.

“I watch what politicians say about African migrants when they are unemployed, when they may commit a crime, or when they’re considered unsavory, they are ‘African immigrants.’ When their children go on to provide a World Cup victory for France, we should only refer to it as France,” Noah added.

“I will continue to praise them for being African because I believe they are of Africa — their parents are from Africa — and they can be French at the same time,” he said.

“And if French people are saying they cannot be both, then I think they have a problem and not me.”

“America’s not a perfect country,” Noah added. “But what I love about this place is that people can still celebrate their identity in their American-ness.”

My heart was on a Naija rollercoaster yesterday! Thank you Nigeria for the wild ride. #worldcup #thedailyshow #nigeria ?: @ruminasean

Born in Johannesburg, Noah began his career as a comedian, presenter, and actor in his native South Africa in 2002. He held several television hosting roles with the South African Broadcasting Corporation (SABC), and was the runner-up in their fourth season of Strictly Come Dancing in 2008. From 2010 to 2011, Noah was the creator and host of Tonight with Trevor Noah on M-Net and DStv. His stand-up comedy career attained international success, leading to appearances on American late-night talk shows and British panel shows. In 2014, Noah became the Senior International Correspondent for The Daily Show, and the following year, he succeeded long-time host Jon Stewart and is set to remain this position up until 2022.

Noah’s autobiographical comedy book Born a Crime was published in 2016 and garnered critical acclaim. Noah was named one of “The 35 Most Powerful People in New York Media” by The Hollywood Reporter in 2017 and 2018. In 2018, Time magazine named him one of the 100 most influential people in the world