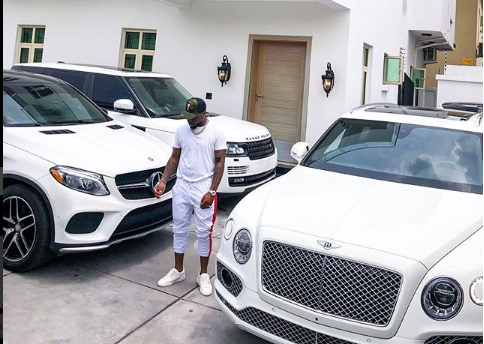 The popular celebrities in Nigeria today are often wealthy. Their net worth as ranked by Forbes comes from endorsement deals, collaborations with other artiste, assets and performances. While most rich celebrity in the country are musicians, Nollywood actors and actresses like Kate Henshaw, Funke Akindele are not left out from the list. Nigeria’s biggest entertainers and earners all come from the entertainment industry and have made money and names for themselves. This article will list the top wealthy celebrities we have in the country this 2018 and also their net worth, endorsement deals and assets.

He is the most popular and richest celebrity in the country for 2018. Ayodeji Ibrahim Balogun music career started under EME record label where he was trained by Banky-W. Today, Wizkid has grown to be one of Africa’s finest and youngest entertainer in the music industry.

Wizkid’s songs have continued to sell beyond expectations, topping the charts as the most listened songs in the country. He is the chairman and owner of Starboy music record label.

His endorsement deals include: brand ambassador for the following top companies- Glo, MTN (deal rumoured to be worth N50 million) and Pepsi.

Wizkid is known to live an expensive lifestyle. He has various edifices, automobiles, businesses and various investments. His net worth by Forbes is $ 50 million.

Davido also features on the list of richest celebrities in Nigeria. Forbes ranked him the most popular youngest artiste in Africa who overtook the likes of P-square and D’ banj to feature on the magazine.

This award winning celebrity has produced many interesting songs. This in turn has helped him win series of awards and nominations. Among the awards that Davido had won, the Mobo award was his highest. In fact, he beat Wizkid to get the prize.

Most people often ask how much is Davido worth in dollars? OBO as he is called is worth $40 million. He just recently finished a show called “30 billion dollar” concert which saw him earn N500 million Naira.

Davido is the son of Nigerian billionaire, Deji Adeleke. It is said that his father’s wealth was what made him rich today. He also owns cars, various businesses and investments. Davido also lives a lavish life style like Wizkid.

#TBT to when I was learning how to cross leg.

Another entertainer worthy of mention is Don Jazzy. He is the richest music producer and owner of Mavin record label which has churned out successful artistes like Dija, Korede Bello, Tiwa Savage and Reekado Banks.

It is said that Don Jazzy charges N500, 000 to produce beatings for a song. He has other investments apart from his musical career. One of the endorsement deals signed by him is being a brand ambassador for Loya milk which worth millions of Naira.

As of writing this post, Don Jazzy isn’t married but lives in his mansion. He also owns expensive cars which explains his rich life-style. Forbes 2018 puts his estimated net worth at $35 million.

She is the current richest female celebrity in the country this 2018. She has surpassed the likes of Genevieve Nnaji and Kate Henshaw due to her various mouth watering endorsement deal. Popular among them is being a brand ambassador for Irokotv.

Aside from that, Funke Akindele is also the wealthiest Nigerian actress of Yoruba origin. The award winning actress was rumored to feature in Marvels movie, “Infinity wars”, but her name was eventually removed and replaced with Genevieve.

Funke is married to Kehinde Oloyede also known as JJC. He too is a musician. As of writing this post, she is said to be worth $30 million.

Tiwatope Savage Balogun was born 5th February 1980. She is known by her stage name Tiwa Savage. Forbes ranked her as the richest female musician in the country this 2018.Tiwa is signed under Mavin records. She is also Nigerian singer, songwriter, performer and actress. This celebrity has recorded a lot of achievements and won series of awards which include one MTV Africa Music Award, two Headies Awards, one Channel O Music Video Award, one Nigeria Music Video Award, and two City People Entertainment Awards, among others.

Tiwa Savage has collaborated with other top Nigerian artistes and stars. Some of which include: Patoranking, Flavor N’abania, Waje and several others. As said earlier, she is signed to Don Jazzy’s Mavin records but owns her own entertainment Company, 323 entertainments. Tiwa has signed many endorsement deals worth millions. She is the brand ambassador to top companies like Pepsi, Forte Oil, MTN and Maggi. Her current net worth is said to be $10 million this 2018.

She is also listed among the wealthy Nigerian celebrities.  Kate Henshaw is a popular Nollywood actress who has been in the limelight for a long time now. Her net worth is said to be estimated at $9 million. Although, Kate was born in Cross River State, she studied a medical course at the university of Calabar before working at the Bauchi State General hospital. Her career began when she was auditioned for the lead role in the movie “When the Sun Sets” and was handed the role. She has acted over 50 nollywood movies and has attained celebrity status. In 2008 she won the Africa Movie Academy Award for Best Actress in a Leading Role for the film Stronger than Pain. It is said that Kate Henshaw owns three buildings and other properties around the country. She is a Glo ambassador and the face of food-seasoning company, Onga.

Another Nollywod actress on this wealthy Nigerian celebrity list is Genevieve Nnaji. Although, she has not featured on screen for a while, it will shock you to know that the Nigerian richest celebrity with the highest endorsement deals is Genevieve. Her deals with top brands like Lux, Amstel Malta, Polo, Etisalat, e.t.c puts her among Nollywood’s highest earners 2018. It was rumored that she purchased a mansion in Ikoyi for N220 million and owns a clothing line, St Genevieve.

Seen as legendary and best male singer in the country, 2face was among the plantashun boiz crew and had been ranked as the richest musician in Nigeria and Africa for a long time before Davido and Wizkid took the stage. He is also one of the highest earners as a celebrity, raking up endorsement deals with top firms around the country. The music legend has hit tracks which sold internationally and topped the charts for years. His popular African Queen still remains his best hit song so far. 2baba is married to Annie Idibia but have other children outside wedlock. His net worth is estimated at a sum of $9 million.

Olamide is a rich Nigerian rapper and musician who is popular. He is the owner of the popular music record label group– YBNL Nation. Olamide net worth in dollars was estimated at $6 million in 2017. He owns two fueling stations and has landed properties around the country. He makes money through his music plus collaborations with other artistes. Olamide is also a brand ambassador and a businessman who has invested heavily in Lagos state. Some endorsement deals which Olamide signed with top companies include: Ciroc, Guinness worth N80Million and the Etisalat deal which worth N80 million.

Just like Olamide, Phyno is another popular Igbo rapper that has attained celebrity status. His songs are mostly in Igbo but he has other songs in which he sang in English. Phyno is said to be worth $5 million.