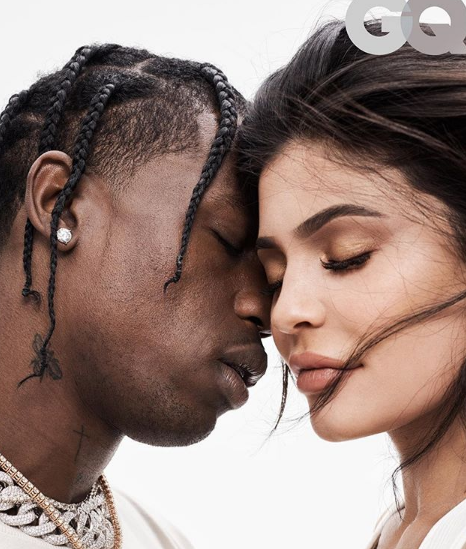 Kylie Jenner & Travis Scott head out after stunning in GQ cover shoot After gracing the cover of GQ this week, Kylie Jenner and Travis Scott have treated themselves to a glorious date night, sans the little one. Leaving five-month-old daughter Stormi Webster with the grandparents/nanny, the #blessed couple took in the culinary delights of Carbone in the Big Apple and appeared to be pretty chuffed with their little romantic rendezvous. Kylie, 20, was wearing an LBD and patent combat boots for the occasion on Wednesday as rapper Travis, 26, opted for a white tee and baggy jeans.

Kylie was positively luminous ( Seems they weren’t on the same dress-code wave length, but eh, what are you gonna do? What you holding there, Trav? ) Oh, he also carried a suspicious looking rollie there… Kylie was one glorious goddess as she kept her hair pulled back and let a sparkler on her ring finger do the talking. Joining them was Kylie’s thigh scar (which couldn’t really do anything BUT join them, we know), which garnered a lot (like, a lot) of attention after it stole the Gentleman’s Quarterly covershoot this week. We were blessed with the first joint-photoshoot of the couple – who have been more under the radar after welcoming Stormi earlier this year – which was released with much fanfare and the tres chic images left punters shaken and stirred all at once.

The steamy cover shoot, which sees Kylie straddling her rapper boyfriend in a skimpy leotard, is gaining attention for reasons other than the amount of butt on show, though. Kylie has been praised for showing off her leg scar on the magazine cover, shunning the airbrush to prominently showcase the mark, which sits above her left knee – and whatever you think about Travis and Kylie, the general consensus was that it was pretty cool a scar was being displayed so prominently on a magazine cover. The injury is the product of a pretty painful accident, though. In 2011, the lip kit mogul told Celebuzz that the injury was caused during a game of hide and seek gone wrong. Kylie explained: ‘When I was about five, my sister [Kendall] and I were playing hide and seek, and I hid inside this really tall, enclosed gate.

After a while, when my sister didn’t find me, I had to climb up on this sharp pole sticking out from the gate. ‘I slipped, and the pole went into my leg. I tried pulling away to get the pole out, but it just tore through my whole leg.’

Kylie Jenner shared an emotional video on Sunday, February 4, documenting her pregnancy just moments after she revealed she had given birth to her first child with boyfriend Travis Scott. Kylie Jenner and Travis Scott: A Timeline of Their Relationship
The video is an amazing look into the reality star’s nine-month journey, as she famously hid her pregnancy so that she could “prepare for this role of a lifetime in the most positive, stress free, and healthy way i knew how,” according to the Instagram post in which she revealed she had delivered a daughter on February 1.