Is Beyoncé on the run from pregnancy rumors? 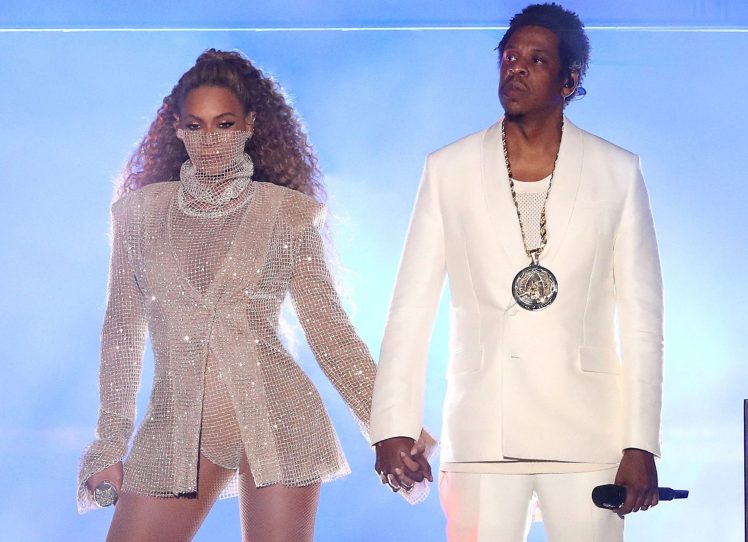 For the record, the music superstar has yet to confirm or deny whether she’s expecting baby No. 4, but that hasn’t kept her loyal Beyhive from presenting what they claim is convincing evidence. Throughout the conclusion to the European leg of Bey and Jay-Z’s On the Run Tour II, some fans have pointed out that another bundle of joy could be on the way for the Carter family. In footage captured by concert attendees and shared on various fan sites and blogs over the past few days, Beyoncé showcases her figure in a number of skintight ensembles. And during a recent pitstop in Paris, the 36-year-old opted for a baggy fringe jacket styled over a pair of denim hot pants.

But here’s where the Beyhive really starts buzzing:And days ago, fans think Queen Bey dropped another clue about growing her brood by posing in front of a No. 4. Of course, Jay-Z and Beyoncé are already the proud parents to 6-year-old Blue Ivy Carter and twins Rumi and Sir Carter, who were born last year. (And then again, we all know how sacred the number 4 is to Bey and Jay.)

As one Twitter user mused, “Beyoncé is really pregnant again.. and she’s about to be a mother of 4 WOW.” Another fan also added, “SHE’S CREATING THE NEXT DESTINY’S CHILD BEFORE OUR EYES.”

Beyonce’s pregnancy announcements are truly the stuff of legend. Firstly, she announced she was pregnant with Blue Ivy by dropping her mic after hitting notes only dogs could hear at the MTV VMAs and rubbing her belly. Then, she revealed she was expecting twins Rumi and Sir by posing in her underwear and a veil in front of a floral arch in the most extra Instagram announcement ever. But now, some of the Beyhive think that the 36-year-old is expecting once more thanks to a cryptic Insta post and ‘baby bump’ sightings.

It was speculated at the beginning of On The Run II tour that Beyonce could be pregnant after exhibiting a bit of a bump as she performed. Which, as anyone knows, could have been just a bit of bloat from eating pasta, or just Bey living her life. However, the rumours have reignited again after Bey and Jay Z’s concerts in Rome, Barcelona, Paris and Nice where fans claimed the singer sported a bump. Speculation has ramped up also thanks to a video where Beyonce finishes a performance of Bonnie & Clyde ’03 by rubbing her stomach.

It’s not just a bit of bloat that have some people believing the Carters are expecting baby number four. Last week, Beyonce shared a picture of herself looking all kinds of *fire emoji*, resting against a wall in a colourful shirt, denim shorts and heels. However, the Love On Top singer was standing next to a big number four, which is famously a precious number for the Carters – Bey and Jay were born on the fourth day of September and December respectively, they tied the knot on 4 April 2008 (aka 4/4), Beyonce’s fourth album was called 4, and Jay-Z’s 2017 album was called 4:44.