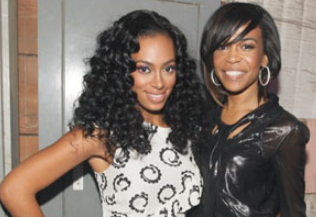 Solange Knowles, Beyonce’s younger sister, was one of the celebrities who reached out to Michelle Williams after the former Destiny’s Child singer revealed she was admitted into a mental hospital to treat depression. Michelle Williams, 37, took to Instagram on Tuesday to reveal her struggle with depression, while letting her followers know she’s been suffering from depression since the age of 13.

Yasss #solangeknowles ??? Serve those looks girl! Are you loving this ?! #angelbrinksfashion

After she shared her struggles, Solange and her mom Tina Lawson sent encouraging messages of support to her. Solange commented on her Instagram post, writing: “Love u so Michelle! Really proud of you. Sending u all the love in the world.” And Beyonce’s mum wrote: “Michelle My Belle, I’m so proud of you! You have given unselfishly of your time and support to so many and I know that you will be the best example of self-care which we all need. Keep being a warrior and an advocate for you. I love and support you with all my being.” According to reports, Michelle admitted herself into a facility just outside of Los Angeles and has been receiving treatment there for several days.

Knowles was born in Houston, Texas, to Mathew Knowles and Tina Knowles. Solange’s older sister is singer Beyonce. Her father, originally from Alabama, is African American, and her mother, originally from southern Louisiana, is Creole (with African, Native American, and French ancestry). Her maternal grandparents are Lumis Beyincé and Agnez Dereon, (a seamstress). She is also a descendant of Acadian leader Joseph Broussard. As a child, Knowles studied dance and theater. At the age of five, she made her singing debut at an amusement park. She began writing songs at the age of nine. At 13, she decided to pursue recording, but her parents initially advised her to wait. At the age of 15 Knowles replaced a departed dancer and performed with her sister’s group Destiny’s Child on tour. During the group’s opening stint for American pop singer Christina Aguilera’s tour, Knowles temporarily replaced Destiny’s Child member Kelly Rowland after she broke her toes backstage during a costume change. When Knowles was 16, her father, who was then also her manager, signed her to his recording company, Music World Entertainment, along with Columbia.

Expressing an interest in music from an early age, Knowles had several temporary stints as a backup dancer for Destiny’s Child, before signing with her father Mathew Knowles’s Music World Entertainment label. At age 16, Knowles released her first studio album Solo Star (2002). Between 2005 and 2007, Knowles had several minor acting roles, including the direct-to-video Bring It On: All or Nothing (2006) and continued writing music for her older sister Beyonce Knowles and for ex-Destiny’s Child group members Kelly Rowland and Michelle Williams.

In 2007, Knowles began to record music again. Her second studio album Sol-Angel and the Hadley St. Dreams (2008) deviated from the pop-oriented music of her debut to the Motown Sound of the 1960s and 1970s. It peaked at number nine on US Billboard 200 and received positive reviews from critics. She followed this up with the 1980s pop and R&B–inspired extended play True (2012) on Terrible Records and her imprint Saint Records. Her third studio album, A Seat at the Table (2016) became her first number-one album in the United States. The album’s first single, “Cranes in the Sky” won the Grammy for Best R&B Performance. Billboard magazine ranked her as the 100th most successful dance artist of all-time. In 2017 Solange was honored with the “Impact Award” at Billboard Women in Music.

Knowles was heavily influenced by Motown girl groups and says that her first passion is songwriting. She is frequently compared by the media to her sister, Beyoncé, but Solange insists they have different aspirations and are musically different. Her other ventures include an endorsement deal with Rimmel London and a line of hip-hop-oriented merchandise for young children. On November 16, 2014, Knowles married music video director Alan Ferguson in New Orleans, Louisiana