Beyonce pregant with her fourth child? 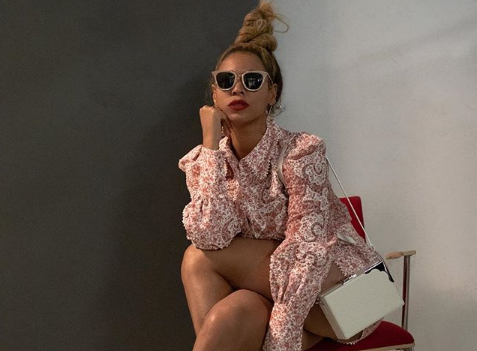 At least once a year, there apparently has to be speculation that Beyonce is pregnant and it seems it’s that time of year again. Fans have been sharing footage from her current “On the Run II” tour with hubby Jay-Z to try and read the tea leaves as to whether a fourth child is on the way.
The buzz seems to have kicked off more than a week ago after the singer rested her hand on her stomach while performing “’03 Bonnie & Clyde.”
Footage of the moment was posted on social media, and the move reminded fans of her first pregnancy reveal at the 2011 MTV Video Music Awards. Things got even more interesting after Bey posted a photo of herself next to the number four. She and Jay are already the parents of 6-year-old daughter, Blue Ivy and one-year-old twins, Sir and Rumi.
There have also been videos of her recent performances posted by followers with more speculation.

Of course, all of this can be explained in other ways. The number four has special meaning to Jay and Bey. Her birthday is September 4 and Jay’s is December 4. They both have the number tattooed on their hands. Their daughter’s middle name, “Ivy,” is in honor of the roman numeral four. But that would take all of the fun out of it wouldn’t it?
In the meantime, the couple have wrapped up their European tour. They’ll next travel to North America for additional shows. Reps have been reached out to for the couple for comment, but we’ll probably know when you know. Which is to say, Beyonce tells the world what she wants it to know when she wants us to know it.

Beyonce and Jay-Z will be among headliners at a Nelson Mandela tribute concert to be held in South Africa at the end of the year. The couple will form part of a star-studded line-up at the Mandela:100 event on December 2 to honor the legacy of the anti-apartheid hero in his Centenary year.

Other performers include Ed Sheeran, Chris Martin, Pharrell Williams, D’banj, Femi Kuti, Sho Madjozi, Tiwa Savage and Wizkid at the event put together by the non-profit Global Citizen network, who say the concert is the “biggest campaign on the Global Goals to end extreme poverty ever.” Global Citizen has held annual concerts aimed at getting young people involved in causes since 2012. Media mogul Oprah Winfrey will also deliver a keynote speech on former South African president Mandela’s teachings at the event.
The Mandela 100 concert is the first global citizen festival to be held in Africa.

South Africans have begun sharing their excitement in anticipation of the concert, particularly as Beyonce last performed in South Africa in 2004. They will be able to earn free tickets to the concert by taking action in Johannesburg’s local communities and Global Citizen’s platforms from August 21.  While a limited number of tickets will also be available for purchase from July 11.  The concert will be the summit of the year-long ‘Be The Generation’ campaign, a celebration of the former President’s centenary inspired by his “life-long dedication to rallying people together to use their collective voices to speak for the most marginalized people,” according to Global Citizen. While Nelson Mandela’s legacy remains a strong inspiration, the non-profit’s presence in South Africa was also motivated by a need to “galvanize young, passionate people across Africa to pressure their leaders to make important strides on the Global Goals,” the organization said on its website.