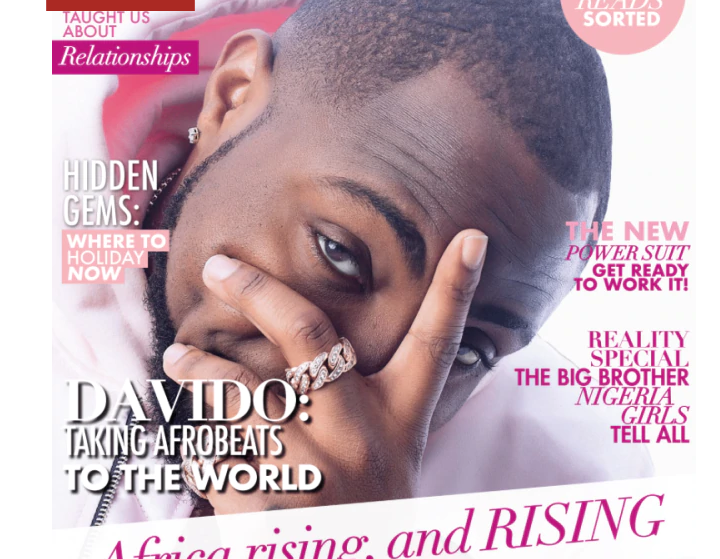 In a bid to spotlight this, the magazine features one of the world’s biggest Afrobeats superstars, Davido, for an exclusive interview. He dishes on the not-so-glamorous aspects of his journey to success, and a rare insight into exactly what it takes to be one of Africa’s most formidable artists. From career challenges, to making up with Wizkid, to the scoop on the love of his life Chioma, Davido reveals it all in this issue.

playDavido shines on the cover of Glam Africa’s latest issue

Speaking on one of the hurdles he had to overcome, Davido says:

“I left Nigeria for a while in January 2016, and I got signed to Sony around that time. And then I was left thinking, like, I’ve signed this deal…now what? So when I dropped this If thing, it at first didn’t really move. Nothing in general moved for me. I wouldn’t say that I was depressed  at the time since I was just trying to stay positive, but I was like ‘what is going on?’…”The edition of the magazine also takes an in-depth look into all the unique elements of Africa’s tremendous rise — from food, to music, to fashion, beauty, business and politics.

Glam Africa also officially debuts its Beauty Box in Nigeria, where each yearly subscriber of the magazine will receive a free box of beauty products by Sleek Studio. Glam Africa Magazine is a quarterly lifestyle publication that showcases African excellence with a worldwide readership of 1.5 million and distributed in Ghana, Nigeria, South Africa and United Kingdom.

Davido was born on November 21, 1992, to Chief Deji and Vero Adeleke in Atlanta, Georgia. His father is a Nigerian business magnate and his late mother was a university lecturer. He attended the British International School in Lagos. Davido studied Business Administration at Oakwood University prior to relocating to Nigeria.Davido’s interest in music started during his time at Oakwood University. He bought musical equipment and started making beats, in addition to recording vocal references.He dropped out of Oakwood University when he started getting bad grades and relocated to London, where he focused more of his energy towards vocals as opposed to production. When Davido returned to Nigeria in 2011, his music career was sidelined after he agreed to honor his father by enrolling at Babcock University. In July 2015, Davido earned a music degree from Babcock after his father paid the university to erect a music department for an inaugural class of one.

Three months later, the song got leaked after he sent it out to some friends. On May 6, 2012, HKN Music released “Overseas” as a single off the album. The unfinished version of the song leaked prior to the official release. On September 28, 2012, HKN Music released the music video for “All of You”. The song was produced by Gospelondebeatz. In an interview with Factory 78 TV, Davido said he recorded the song with Gospel after meeting him at a mall. To further promote the album, Davido released music videos for “Ekuro”, “Gbon Gbon”and “Feel Alright”.

Davido shines on the cover of Glam Africa’s latest issue

Work on Davido’s debut studio album, Omo Baba Olowo, began in 2011. On May 7, 2011, Davido produced and released his first musical recording “Back When” which was a major hit. The song served as the album’s lead single and received frequent airplay. The music video for the single, uploaded onto YouTube on May 9, 2011, was shot and directed in Nigeria by Clarence Peters.[18] Davido told Factory 78 TV that he recorded “Back When” in London. Davido co-produced “Dami Duro” with Shizzi and released it on October 30, 2011. The music video for “Dami Duro” was released on January 8, 2012. It was shot and directed in Lagos by Clarence Peters, and was released during the Occupy Nigeria protests. In an interview posted on NotJustOk, Davido spoke on the release and composition of “Dami Duro”. He said he recorded “Dami Duro” in August 2011.