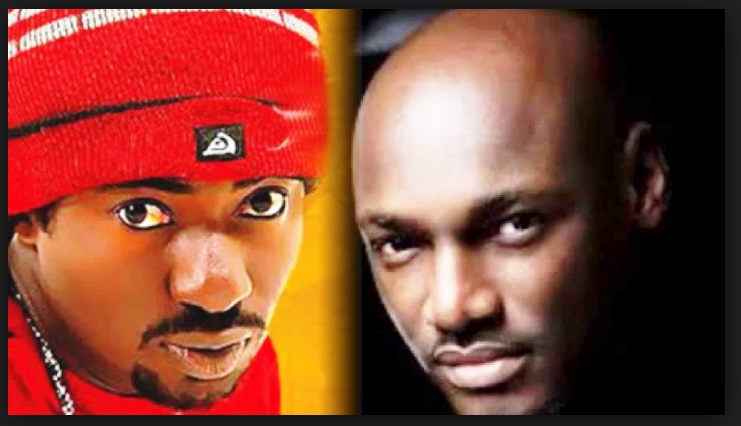 Music legend, 2Baba has been the target of a lot of accusations from his former bandmate, Blackface in recent times. He has however come out to threaten Blackface with legal action unless the latter apologizes for defamation of character. In a letter written by his lawyers, it states that Blackface (real name Ahmedu Augustine) should tender a general unreserved apology for all statements made and published by him in the past as well as cease form making further defamatory remarks. The letter also gives him a week to apologize or face the music at the court of law.

Blackface had in 2017 threatened to sue 2Baba and his manager, Efe Omoregbe over alleged copyright infringement in an interview with Premium Times. He accused 2Baba of stealing his songs like “Let Somebody Love You” and the mega-hit, “African Queen”. He also made other allegations recently on Instagram accusing 2Baba of trying to sabotage his career.

In a recent developmemnt Blackface says he is being sued for N50m by Innocent ‘2Baba’ Idibia, his former Plantashun Boiz bandmate. The ‘Hard Life’ singer says 2Baba is suing him over his age-long claim that he wrote ‘Let Somebody Love You’ and ‘African Queen’, the latter’s biggest song to date. In a post on Instagram, Blackface said: “2face Idibia @official2baba & his manager Efe Omorogbe @efeomorogbe sued me for 50Million.

“They (are) claiming I didn’t write #letsomebodyloveyou & #africanqueen (and) what else? Just about time me and my legal team (file) for #mydefence. After which I will release my album #risingsun (defendervol2).”

Blackface, 2Baba and Faze are member of the defunct Plantation Boiz. 2Baba moved to Lagos and started performing with rapper Blackface Naija. He had met BlackFace while attending IMT. With Blackface (Ahmedu Augustine Obiabo) and with musician Faze (Chibuzor Oji), he went on to form the trio band Plantashun Boiz.

from canada with love. Thank u. una 2 much

Plantashun Boiz released two successful albums: Body and Soul (2000) and Sold Out (2003)under the Nelson Brown’s owned Label (Dove Records) before disbanding in 2004. Relations were marred for many years during which the band broke up and its members started their solo careers. Long after the break-up known as the “Faze vs Tuface” beef, the band came back together in 2007 for the purpose of recording a third and final album entitled Plan B (2007).

After the disbandment of Plantashun Boyz in 2004, all band members sought separate musical careers. 2face Idibia released his debut solo album Face 2 Face (2004), which established him as a viable solo artist. Following the release of his debut album, he released his second album Grass 2 Grace in 2006, which contained hits “One Love”, “True Love, “4 Instance”. He is the founder of Hypertek Entertainment. In 2006, his song “African Queen” was used in the soundtrack for the film Phat Girlz, which was released internationally.

He released a promotion album in 2008 called The Unstoppable releasing the single “Enter the Place”. Problems with album distribution in 2007 caused as shift of the release date of the album from 2008 to early 2009. In 2010, 2face released an “international edition” of the same under the title The Unstoppable International Edition making him the first Nigerian artist to have an appropriately priced international album. 2face released two more singles from the international version of his Unstoppable album. The international edition of the album won two awards at the 2010 SoundCity Music Video Awards. He also won the Channel O Music Video Awards Best African Western award and the MTV Africa Music Awards for Best Male and Artist of the year.

Upon leaving the music label Kennis Music, he set up his own record label known as Hypertek Entertainment. He is part of the Sony All African One8 Project alongside seven other musicians across Africa recording a single with R. Kelly and Prince Lee titled “Hands Across the World”. He is the first non-Liberian to become an honorary member of the Liberian music society in recognition for his outstanding contribution to the growth of music in Africa. He has been named Red cross ambassador society of Nigeria. 2face has several collaborations all over the globe, giving his collaborators the opportunity to win an awards for each duet such as street credibility by 9ice, possibility by p-square and lots more. He is adored by his colleagues and every entertainer in Nigeria music industry as a role model. 2face and heavy weight American Rapper Jay Z met in NYC 2014. 2face Idibia has also been an ambassador for quite a number of brands including Guinness, Nigerian Breweries etc. He is also the brand ambassador for National Agency for Food and Drug Administration and Control.

After the Plantashun Boiz split up in 2004, Blackface led a solo musical career. He released the hip hop album Ghetto Child in May 2004 collaborating with a number of artists. The album contains “Hard Life” featuring Alabai as the first single. He also recorded a full album for his crew D Tribunal called What We Are. After Ghetto Child, he released Evergreen, Jungle Fever, Me, Musiq and I, Dancehall Business and the prospective Defender. In 2013, he made a collaborative album 200 with Maine Eazz.