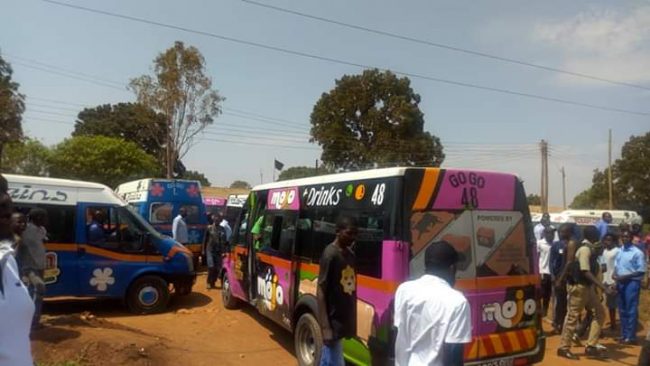 It was a loud morning in Chilenje as Flash bus drivers made their way, and have parked their buses at Chilenje Police Station in protest against what they theme as extortion from PF cadres on Apex and Chilenje route in Lusaka.

Four people have been arrested by police while several others ran away when the Flash Bus drivers took police and PF National Youth Chairman Kelvin Sampa around the roads.

There have been numerous concerns from commuters and other public service vehicle drivers over harassment from call boys locally known as ‘N’gwa N’gwazi’ who are found at all bus stops across Lusaka, collecting monies from conductors.

And Capital Buses proprietor Ishmael Kankara has alleged that some thugs have infiltrated bus stations in Lusaka where they are collecting money from all bus drivers.

Kankara has however, clarified that there is a misconception that individuals collecting money at bus station are political party cadres when fact they are actually criminals exploiting poor bus drivers.

He has demanded that the Zambia police move in and arrest the criminals as they are stealing from Zambians and also calls on President Edgar Lungu to address the issue as citizens are being harassed by the criminals.

Sampa has however, accused the individuals collecting money from bus drivers of belonging to the UPND yet masquerading as PF members