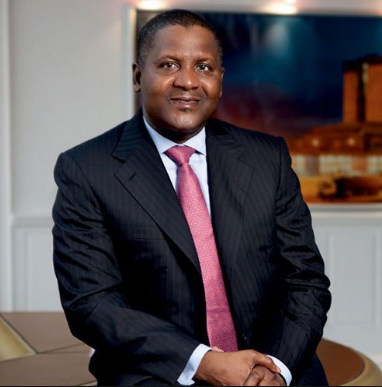 Despite a nearly $2 billion drop in his net worth, Chairman of Dangote Group of Companies, Alhaji Aliko Dangote remained Africa’s richest person with a $12.4 billion fortune. He is currently number 100 on the Forbes Billionaires list which listed the founder of Amazon.com Inc, Jeff Bezos as the richest man in modern history.‎ While Bezos fortune jumped from $112 billion which it was in March this year to $151.4 billion as at yesterday, Dangote’s fortune dipped from $14.1 billion in March to $12.4 billion.

This was however higher than $12.2 billion that he was worth in January this year. Forbes yesterday said Jeff Bezos is the richest person in modern history. The Amazon.com Inc. founder’s net worth cracked $150 billion in New York on Monday, according to the Bloomberg Billionaires Index. That’s about $55 billion more than Microsoft Corp. co-founder Bill Gates, the world’s second-richest person. Bezos, 54, also has topped Gates in inflation-adjusted terms. The $100 billion mark that Gates hit briefly in 1999 at the height of the dot-com boom would be worth about $149 billion in today’s dollars.

That makes the Amazon chief executive officer richer than anyone else on earth since at least 1982, when Forbes published its inaugural wealth ranking. Bezos crossed the threshold as Amazon was preparing to kick off its 36-hour summer sales event, Prime Day, which got off to a rocky start as glitches struck the firm’s website and mobile app. Shares of the company, which had climbed to a record $1,841.95 earlier Monday, pared gains on the news, closing up 0.5 percent at $1,822.49. Bezos’s stay above $150 billion may be short-lived. The stock slipped below $1,800 in extended trading after Netflix Inc. posted disappointing results, rattling tech investors.

This speaks for itself… Bloomberg's list of 50 most influential people who have had an impact on the world in 2017 recognised our GP/CE, Dangote Group, Aliko Dangote, for his outstanding commitment to increase Nigeria's food production capacity. His contribution revolves around his drive to lessen food imports into one of Africa's largest nation, Nigeria, by focussing on domestic production of sugar and diary, with 500 million litres of Nigerian milk to be produced by 2019. #FoodSecurity #Nigeria #Dangote #CapInFeather #Bloomberg #Bloomberg50 #NASDAQ #TimeSquare #Employment #AfricansForAfrica #ValueCreation

The Dangote Group was established as a small trading firm in 1977, the same year Dangote relocated to Lagos to expand the company. Today, it is a multi-trillion-naira conglomerate with many of its operations in Benin, Ghana, Nigeria, and Togo. Dangote has expanded to cover food processing, cement manufacturing, and freight. The Dangote Group also dominates the sugar market in Nigeria and is a major supplier to the country’s soft drink companies, breweries, and confectioners. The Dangote Group has moved from being a trading company to be the largest industrial group in Nigeria including Dangote Sugar Refinery, Dangote Cement, and Dangote Flour.

May 30, 2018: The @AlikoDangoteFoundation donated 150 fully kitted operational cars to the Nigeria Police Force. The Group President & Chief Executive, @DangoteGroup, Aliko Dangote, at the donation ceremony in Abuja said “Today, we are deepening our intervention in security with the donation of these 150 fully kitted operational vehicles to the Police Force. These vehicles will support the Nigeria Police Force in surveillance, crime prevention and promote law and order.” The gesture according to Vice President @ProfOsinbajo, “is the single largest donation of cars by any private individual in the country to the Police force.” Corroborating this view point, The Inspector-General of Police, Ibrahim Idris expressed the appreciation of the Police Force to the @AlikoDangoteFoundation, with a commitment to utilize the cars for the purpose they were donated. He urged Nigerians to go about their business lawfully, noting that The Police Force is now well equipped more than ever before to fight crime across the country. #Security #PPP #Philantropy #Dangote #NigeriaPolice #Nigeria

In July 2012, Dangote approached the Nigerian Ports Authorities to lease an abandoned piece of land at the Apapa Port, which was approved. He later built facilities for his flour company there. In the 1990s, he approached the Central Bank of Nigeria with the idea that it would be cheaper for the bank to allow his transport company to manage their fleet of staff buses, a proposal that was also approved.

In Nigeria today, Dangote Group with its dominance in the sugar market and refinery business is the main supplier (70 percent of the market) to the country’s soft drinks companies, breweries and confectioners. It is the largest refinery in Africa and the third largest in the world, producing 800,000 tonnes of sugar annually. Dangote Group owns salt factories and flour mills and is a major importer of rice, fish, pasta, cement, and fertiliser. The company exports cotton, cashew nuts, cocoa, sesame seeds, and ginger to several countries. It also has major investments in real estate, banking, transport, textiles, oil, and gas. The company employs more than 11,000 people and is the largest industrial conglomerate in West Africa.

Dangote has diversified into telecommunications and has started building 14,000 kilometres of fibre optic cables to supply the whole of Nigeria. As a result, Dangote was honoured in January 2009 as the leading provider of employment in the Nigerian construction industry. He has said, “Let me tell you this and I want to really emphasise it … nothing is going to help Nigeria like Nigerians bringing back their money. If you give me $5 billion today, I will invest everything here in Nigeria. Let us put our heads together and work.

Dangote played a prominent role in the funding of Olusegun Obasanjo’s re-election bid in 2003, to which he gave over N200 million (US$1M). He contributed N50 million (US$0.25M) to the National Mosque under the aegis of “Friends of Obasanjo and Atiku”. He contributed N200 million to the Presidential Library. These highly controversial gifts to members of the ruling PDP party have generated significant concerns despite highly publicized anti-corruption drives during Obasanjo’s second term.

In May 2010, Britain’s Daily Mirror reported that Dangote was interested in buying a 16 per cent stake in Premiership side Arsenal belonging to Lady Nina Bracewell-Smith. Dangote later denied these rumours.

In November 2011, Dangote was awarded Nigeria’s second-highest honour, the Grand Commander of the Order of the Niger (GCON) by the former President, Goodluck Jonathan. Dangote reportedly added $24.2 billion to his personal wealth in 2013, according to the Bloomberg Index, making him the thirtieth-richest person in the world at the time, in addition to being the richest person in Africa.

In 2014, the Nigerian government said Dangote had donated 150 million naira (US$750,000) to halt the spread of ebola. In May 2015, Dangote expressed interest in purchasing the English football team Arsenal. He stated that if he was able to make the purchase he would fire the club’s long-standing manager Arsène Wenger. He has been married four times, and his first three marriages ended in divorce. He has a total of 3 children from these marriages.