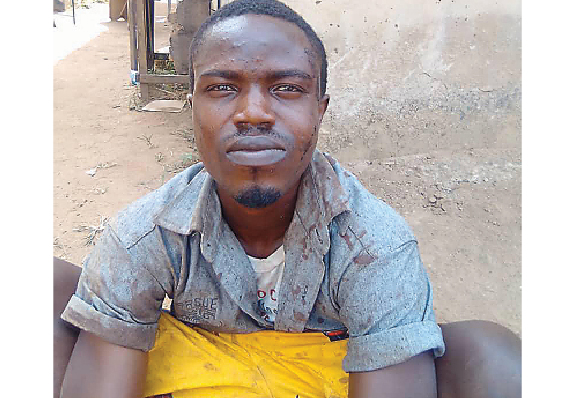 A man who killed his elder brother by stabbing him with a knife has been arrested by the police in Ogun state.

What was supposed to be a New Year celebration at Agbado Crossing area of Ogun State turned tragic on Friday after the man identified as Peter Akinjogun, stabbed his elder brother, Femi Akinjogun, to death.

According to Punch, the suspect is said to be mentally-sick.

Trouble started when the 42-year-old father of two reportedly asked Peter to join him in butchering the ram – a request that angered Peter.

He was said to have picked up a knife and stabbed Femi in the neck, leaving him in a pool of blood. It was gathered that the victim was rushed to a hospital where he was confirmed dead.

The incident was reported to the police at the Agbado Police Station and Peter was arrested by a team led by the Divisional Police Officer, CSP Kuranga Yero.

A source in the community told our correspondent that Peter has been suffering from mental illness for some time and taken to psychiatric hospitals in Ogun and Lagos.

The source said, “The man has a mental problem. He was taken to the psychiatric hospital in Yaba but he ran away from the facility. I learnt that he beat a nurse and fled. On the New Year’s Day, his elder brother and some family members were butchering a ram and he asked him to join them. That was all. He snapped and went for a knife. He stabbed his brother in the neck and he bled to death. The deceased has two kids and his wife is heavily pregnant. He was buried today (Saturday). The family is not willing to pursue any case.”

A relation of the family, who did not mention his name, confirmed the incident to our correspondent on the telephone.

He added, “I am their brother. The guy (Peter) is mentally-ill and had been hospitalised at the psychiatric hospitals in Ogun and Lagos. We don’t want this issue to escalate.”

A resident, who spoke on condition of anonymity, said the incident happened around 5.30pm on Friday but was reported to the police about 11pm after Femi died.

He stated, “Femi usually slaughtered a ram every New Year’s Day and family members went to his house to celebrate with him. On Friday when they were butchering the ram, he requested Peter to assist them but the younger brother got angry.

“Femi chided him and he (Peter) brought out a knife. He stabbed him to death in the neck. His wife witnessed how the incident happened and became unconscious. She was rushed to the hospital where she was stabilised.

“Peter is mentally sick. He ran away from the psychiatric hospital where he was being treated, claiming that he was okay.”

The Police Public Relations Officer in the state, SP Abimbola Oyeyemi, confirmed the incident, adding that Peter would be returned to a psychiatric hospital.

He said, “The man has been suffering from a mental problem since 2017 and he was taken to a psychiatric hospital in Abeokuta. His elder brother was the one paying the medical bills. The brother only asked him to assist in butchering the ram but he stabbed him. He was rushed to a hospital where he died.”