Zambians Scramble For ‘Free Beer’ After Truck Accident In Ndola 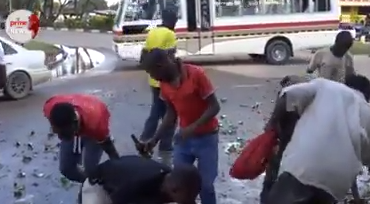 A truck carrying crates of beer was involved in an accident occurring at a roundabout of broadway in Ndola Prime TV reports. It happened when crates fell off the moving vehicle while turning to the western direction in the city.

Instead of assisting the driver and his two companions to secure the beer, several men and women began looting. Some pretended to help pick up whatever was left on the ground but quenched their thirst in one of the fastest consumption rates you’ll ever see – not even water is drank in this manner.

As the helpless driver attempted to stop the excited crowd, the scene was littered with sharp glass, however, this did little to deter the looters, with some even risking to drink the tiny glass particles.

This incident is one of the examples showing how the Zambian population is fixated on alcohol consumption and also shows troubling behavior that occurs at the scene of accidents where some thrive on another person’s misery.