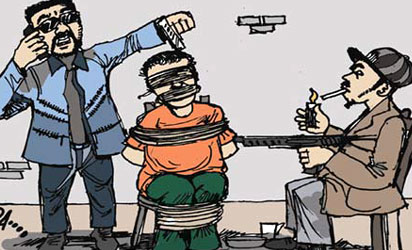 Mrs. Jonathan was kidnapped in her house around the ATC area of Jalingo at about 2:17am on Sunday, local residents told our correspondent.

This is coming barely five days after the Deputy Registrar of the Taraba State University Jalingo, Mr. Sanusi Sa’ad, was kidnapped in his house in the university’s quarters, a few meters away from the house of the abducted Permanent Secretary.

Residents of the area said the gunmen who picked the Permanent Secretary stormed the house and shot fiercely in the air before taking her away to an unknown destination.

Taraba State Police Public Relations Officer, DSP David Misal who confirmed the development to our correspondent said they were yet to get official reports from the family regarding the incident.

“From the intelligence report we have received, the woman is nowhere to be found, but we are yet to receive any official report regarding the incident.

“We want to call on the public not to be afraid of reporting any security threat promptly to security agencies to enable us take proactive measures,” he said.

The State Police Command had, on Wednesday, refuted the report that Jalingo was besieged by kidnappers, forcing residents of the city to desert the streets as early as 7:30pm daily due to fear of kidnappers.

Kidnapping in Taraba, especially Jalingo, the state capital, is gradually becoming a daily occurrence. Just two weeks ago, two of the wives of the Permanent Secretary in the Deputy Governor’s office were kidnapped and released after payment of ransom.