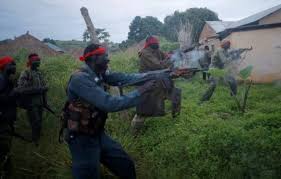 The Jigawa State Command of the Nigerian Police Force, has given the confirmation that Unknown gunmen launch an attack on Garin Maidawa, Abiya ward of Dutse local government on Wednesday night.

CP Bala Zama Sanchi, the State Commissioner of police, stated that one person was killed while almost ten sustained diferent degrees of injury.

He further stated that the attackers were armed robbers and not bandits and he had deployed policemen attached to the Special Anti Robbery Squad to the troubled area.

Speaking with the popular media platform known as DAILY POST,Mr Safiyanu Abdu, Councillor of Abiya ward stated that the unfortunate incident took place when people were deeply asleep last when people were sound asleep He disclosed that ”some people came in with weapons, shooting sporadically at people. ”

He disclosed that a villager was already dead and nine people rushed to Rasheed Shakoni Teaching Hospital for treatment.

It will be recalled that last month armed persons on Saturday March 30 gunmen  attacked some communities in Zamfara State killing at least 10 people.

Residents say over 40 people, mainly farmers, were killed in the attacks. The police, however, say 10 people were killed.

“At Gidan Achali community alone, over 20 people were massacred. And at Kursasa community, 10 people were killed while at Kurya, 13 persons were reported dead,” an official of the Shinkafi Local Government Area told PREMIUM TIMES asking not to be named.

He said the “number of people killed at Gidan Achali community is terrible because the high number of casualties in the area is worrisome.”

The source lamented that despite the repeated attacks on Shinkafi and other local governments in Zamfara, the armed persons still moved freely during the act without being challenged by any security operative.

“It is just like there is no constituted authority in Zamfara State. Nobody cares about our lives.

“We have now become easy prey for bandits in Shinkafi,” he said.

When contacted, the Zamfara police spokesperson, Mohammed Shehu, said only 10 people were killed at an onion farm in Kursasa community.

He said security personnel have been mobilised to the area.

Attacks on remote communities in Zamfara have skyrocketed despite the heavy  deployment of military personnel to the state by President Muhammadu Buhari.

After the gruesome attack and killing of the villagers the bandits also kidnap people for subsequent  ransom payment.