What is the Boko Haram fighting for in Nigeria? 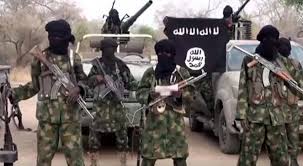 The Islamic State in West Africa (abbreviated as ISWA or ISWAP), formerly known as Jamā’at Ahl as-Sunnah lid-Da’wah wa’l-Jihād (Arabic: جماعة أهل السنة للدعوة والجهاد‎, “Group of the People of Sunnah for Preaching and Jihad”) and commonly known as Boko Haram until March 2015, is a jihadist militant organization based in northeastern Nigeria, also active in Chad, Niger and northern Cameroon.

Founded by Mohammed Yusuf in 2002, the group has been led by Abubakar Shekau since 2009. When Boko Haram first formed, their actions were nonviolent. Their main goal was to “purify Islam in northern Nigeria” (Iyekekpolo 2016:2218). From March 2015 to August 2016, the group was aligned with the Islamic State of Iraq and the Levant. Since the current insurgency started in 2009, Boko Haram has killed tens of thousands and displaced 2.3 million from their homes and was ranked as the world’s deadliest terror group by the Global Terrorism Index in 2015.

After its founding in 2002, Boko Haram’s increasing radicalization led to a violent uprising in July 2009 in which its leader was summarily executed. Its unexpected resurgence, following a mass prison break in September 2010, was accompanied by increasingly sophisticated attacks, initially against soft targets, but progressing in 2011 to include suicide bombings of police buildings and the United Nations office in Abuja. The government’s establishment of a state of emergency at the beginning of 2012, extended in the following year to cover the entire northeast of Nigeria, led to an increase in both security force abuses and militant attacks.

Of the 2.3 million people displaced by the conflict since May 2013, at least 250,000 have left Nigeria and fled into Cameroon, Chad or Niger. Boko Haram killed over 6,600 in 2014.[30][31] The group have carried out mass abductions including the kidnapping of 276 schoolgirls from Chibok in April 2014. Corruption in the security services and human rights abuses committed by them have hampered efforts to counter the unrest.In mid-2014, the militants gained control of swathes of territory in and around their home state of Borno, estimated at 50,000 square kilometres (20,000 sq mi) in January 2015, but did not capture the state capital, Maiduguri, where the group was originally based.[34] In September 2015, the Director of Information at the Defence Headquarters of Nigeria announced that all Boko Haram camps had been destroyed. On 7 March 2015, Boko Haram’s leader Abubakar Shekau pledged allegiance to the Islamic State of Iraq and the Levant and rebranding as Islamic State in West Africa.

The group’s name has always been Jamā’atu Ahli is-Sunnah lid-Da’wati wal-Jihād (جماعة أهل السنة للدعوة والجهاد), meaning “Group of the People of Sunnah for Dawa and Jihad”. It was briefly known as Wilayat Garb Ifrqiya, meaning “West African Province”, between March 2015 and August 2016 while it was a part of the Islamic State.

The name “Boko Haram” is usually translated as “Western education is forbidden”. Haram is from the Arabic حَرَام (ḥarām, “forbidden”); and the Hausa word boko (the first vowel is long, the second pronounced in a low tone), meaning “fake”, which is used to refer to secular Western education. Boko Haram has also been translated as “Western influence is a sin”and “Westernization is sacrilege”. Until the death of its founder Mohammed Yusuf, the group was also reportedly known as Yusifiyya. Northern Nigerians have commonly dismissed Western education as ilimin boko (“fake education”) and secular schools as makaranta boko.

Boko Haram was founded upon the principles of the Khawaarij advocating Sharia law. It developed into a Jihadist group in 2009. The movement is diffuse, and fighters associated with it do not follow the Salafi doctrine. Their beliefs tend to be centered on strict adherence to Wahhibism, which is an extremely strict form of Islam that sees many other forms of Islam as idolatrous. The group has denounced the members of the Sufi, the Shiite and the Izala sects as infidels. Boko Haram seeks the establishment of an Islamic state in Nigeria. It opposes the Westernization of Nigerian society and the concentration of the wealth of the country among members of a small political elite, mainly in the Christian south of the country. Nigeria is Africa’s biggest economy, but 60% of its population of 173 million (as of 2013) live on less than $1 a day. The sharia law imposed by local authorities, beginning with Zamfara in January 2000 and covering 12 northern states by late 2002, may have promoted links between Boko Haram and political leaders, but was considered by the group to have been corrupted.

According to Borno Sufi Imam Sheik Fatahi, Yusuf was trained by Kano Salafi Izala Sheik Ja’afar Mahmud Adamu, who called him the “leader of young people”; the two split some time in 2002–2004. They both preached in Maiduguri’s Indimi Mosque, which was attended by the deputy governor of Borno. Many of the group were reportedly inspired by Mohammed Marwa, known as Maitatsine (“He who curses others”), a self-proclaimed prophet (annabi, a Hausa word usually used only to describe the founder of Islam) born in Northern Cameroon who condemned the reading of books other than the Quran. In a 2009 BBC interview, Yusuf, described by analysts as being well-educated, reaffirmed his opposition to Western education. He rejected the theory of evolution, said that rain is not “an evaporation caused by the sun”, and that the Earth is not a sphere.

Campaign of violence
Boko Haram’s attacks consist of suicide bombers as well as conventional armed assaults on both civilian and military targets. Following the 2014 kidnapping, a majority of Boko Haram’s suicide bombers are female; some are as young as seven years old. Boko Haram jihadists rely on stealth, blending into local communities or hiding in the vast countryside. Critics accuse the Nigerian military of not properly equipping its soldiers to fight Boko Haram.