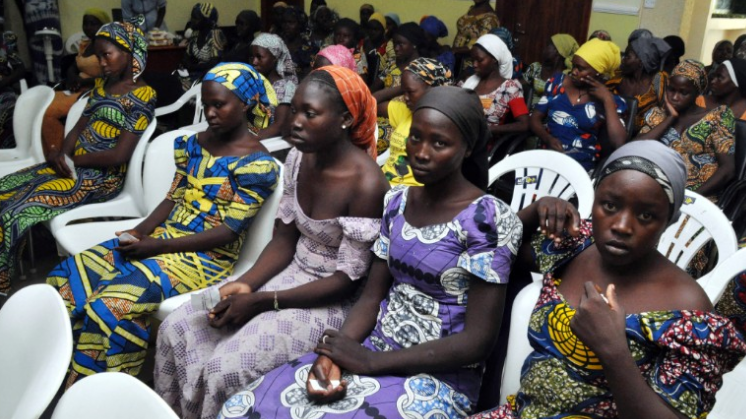 On Wednesday, the Nigeria Police Force said it had arrested 22 members of the dreaded Boko Haram sect, 8 of which the force said were involved in the kidnap of 276 from Chibok Secondary School in Borno state.

Parading the suspects, Borno State Commissioner of PoliceDamian Chukwu said the suspects were arrested at different locations in Borno and Yobe states by officers of the IGP Intelligence Response Team led by DCP Abba Kyari.

Chukwu said that the suspects have confessed to their involvement in the numerous attacks on civilians, security agents, and religious houses.

Speaking to CNN, Kyari said that a top commander of Boko Haram who was also arrested said the remaining Chibok girls won’t be coming back as they have been married to other Boko Haram commanders.

Kyari said: “They said many of the girls have accepted the Boko Haram doctrine and don’t see any reason to leave their husbands. It’s only those that were desperate to come that were released in that swap deal (which saw the release of 82 girls).”

“They confessed that they were part of the group that kidnapped the Chibok girls. One of them, a commander said they were over a 100 members of the militant group took part in that abduction,” Kyari added.

See the police full statement on the arrest below:

Arrest of 22 Dreaded Boko Haram Terrorist BHT Group Members and Leaders Responsible for The Kidnapping of Chibok School Girls, Over 50 Suicide bombings within Maiduguri Borno State and Adamawa State, Invasion of Bama and Gwoza. Several Attacks/Ambush and Killing of Thousands of Innocents Nigerians Including Security Agencies and Civilians in Borno and other Northeastern States of Nigeria.* Recovery Of 11 Ak47 Rifles and other weapons.

Irked and worried by the Persistent Suicide Bombings and killing of Innocent Citizens in the North East by the dreaded Boko Haram Terrorist Group Terrorising North Eastern Nigeria, IGP Ibrahim K Idris equipped and deployed the Special Operatives of the IGP Intelligence Response Team IRT with enough Credible Technical Intelligence to Maiduguri Borno State to trace and Arrest all the TERRORIST Responsible for the Suicide Bombings and other Terrorist Attacks in the North East. After a lot of Planning and use of Advance Technology, Between 04/07/18 and 09/07/18, IRT Special Teams With Support from SARS/CRACK team of Borno State Command Swung into action and  eventually Succeeded in arresting 22 Confirmed Boko Haram Terrorists BHT who confessed to several Suicide bomb explosions within Borno and Adamawa States, Kidnapping of the Chibok School Girls, Invasions Of Bama/Gwoza among many other crimes. Suspects narrated various roles each of them played. Amongst them are the Commanders and Coordinators of Suicide Bombings in Borno State, Coordinator and members of the Chibok School Girls Kidnapping, Ambushes on Security agents, Logistics Suppliers and their receivers of gold, international currencies, cows etc.

All the TERRORISTS were arrested in different locations within Borno and Yobe states.

All suspects arrested have confessed to be masterminds of several attacks and suicide bomb blasts in Baga Road, 3-3, Custom, Bulunkutu, Post Office, Muna, Kasuwan Shanu, Dalori IDP camp etc etc in Maiduguri and many suicide attacks in Adamawa State, killing of thousands of innocent Nigerians, including ambushes on security agencies and civilians in the many parts of Northeast Nigeria.
11 Rifles and many other weapons and exhibits recovered from the deadly Terrorist group.

Suspects are helping the operatives with useful information to arrest the other fleeing BHT Commanders.