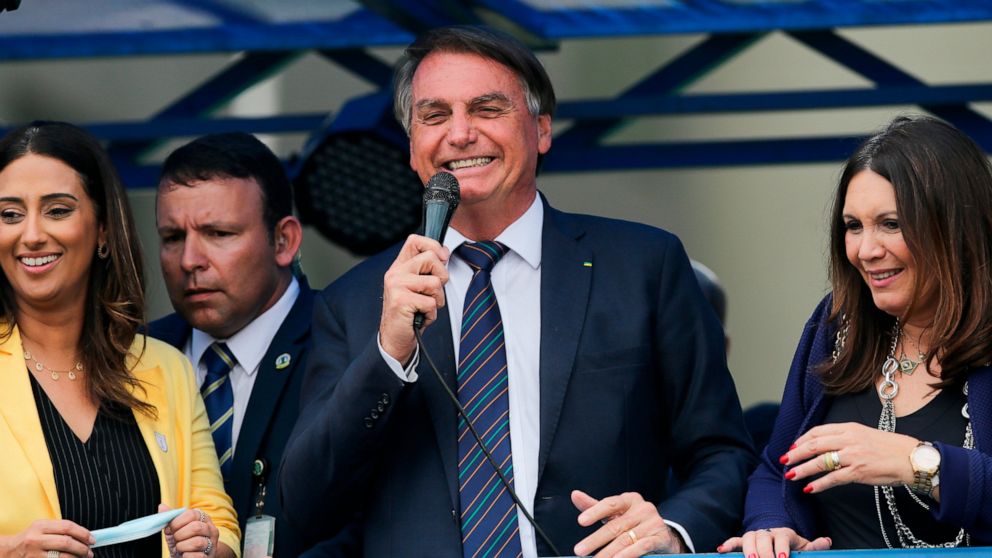 Brazilian President Jair Bolsonaro officially joined the centrist Liberal Party on Tuesday, a key political deal in his quest for reelection in 2022.

After two years without a political party, Bolsonaro decided to join one of the parties in the so-called Center group, a sign that he is changing course from his 2018 campaign strategy, when he sharply criticized old-school political practices.

“It is a simple event, but very important so that we can compete for something later,” Bolsonaro said in Brasilia during the ceremony in which a Cabinet minister and one of his sons, Sen. Flávio Bolsonaro, also joined the Liberals.

Bolsonaro hopes the alliance can help him defeat his nemesis, former President Luiz Inácio Lula da Silva, who served from 2003 to 2011 and will likely try for a third term in 2022. “Lula,” as da Silva is universally known, leads Bolsonaro in the main polls.

The Liberal Party became the ninth party of Bolsonaro’s political career, which began as councilman of Rio de Janeiro in the late 1980s. Like other Center parties, the Liberals are known for ideological malleability and for making alliances to seek shares of government appointments and funding. In 2002, the party allied with da Silva to run a candidate for vice president.
Source – ABC News Uneasy calm on Tuesday evening pervaded the Senate wing of the National Assembly as members of the Senate Committee on Army clashed over alleged lopsidedness in recent recruitments carried out by the Nigerian Army, NA.

The development happened during an interactive session between members of the committee and the Commander, Training and Doctrine Command of the Nigerian Army, Major General S.O Olabanji.

Trouble started when a member of the committee who doubles as the Deputy Minority Whip of the Senate, Senator Abdullahi Ibrahim Danbaba (PDP Sokoto South) took up General Olabanji on alleged lopsided nature of recruitment carried out by the Army recently.

But the acting chairman of the committee, Senator Abba Moro (PDP Benue South) who presided over the session, ruled Danbaba out of order, saying “this meeting is not for such enquiry.”

Apparently irked by the development, another member of the committee, Senator Barinada Mpigi (PDP Rivers South East), raised the issue again, saying “lopsidedeness in recruitment is not an issue to be put aside or rule against.”

Senator Moro again ruled against the enquiry, insisting that the session was not for review of recruitment made by the Army, but on Tactical Training and Doctrine men and officers.

“The questions being raised by my colleagues on alleged lopsided recruitments are being thrown to the wrong person. The Chief of Army Staff, Lt – Gen. Farouk Yahaya is the one who can do justice to such allegation or enquiry,” he said.

Angered by the insistence of Senator Moro that questions on recruitment should be entertained at the session, Senators Danbaba and Mpigi stormed out of the meeting.

Expressing his anger to journalists on what transpired at the session, Senator Danbaba said he walked out from the meeting with Senator Mpigi based on dictatorial action of Senator Moro.

“He shouldn’t have ruled us out of order since the military man whom the question was directed to, did not complain.

“The issue of marginalization in recruitment has never been responded to, it is part of the oversight process of the committee to ensure that whatever is to be done should be done to ensure justice, the Nigerian Army like any institution of government in Nigeria is supposed to comply with provisions of the Constitution of the Federal Republic of Nigeria 1999 as amended and that constitution has made it very clear that the issue of federal character and representation is paramount as a constitutional issue.

“I’m not blaming the Army, the Army has been performing very well, but at the same time, the issue of recruitment is very very important.

“I left the meeting, I stormed out with Mpigi because we were angry,” he said.

Defending his action, Senator Moro in a counter interview with journalists, said he had no any regret for ruling Danbaba out of order as far as the issue of alleged lopsided recruitment was concerned.

“Danbaba and Mpigi’s questions were directed to a wrong person. What explanation were they expecting from Commander, Training and Doctrine Command on recruitment.

“Besides, the committee had tabled the issue before the Chief of Army Staff few months ago with response bothering on physical and medical reasons for those recruited and those who failed in the exercise,” he stressed.

It was, however, gathered that Senator Danbaba vowed to take the matter to the Leader of the Senate, Senator Yahaya Abdullahi (APC Kebbi North) for formal complaint.
Source – Daily Post