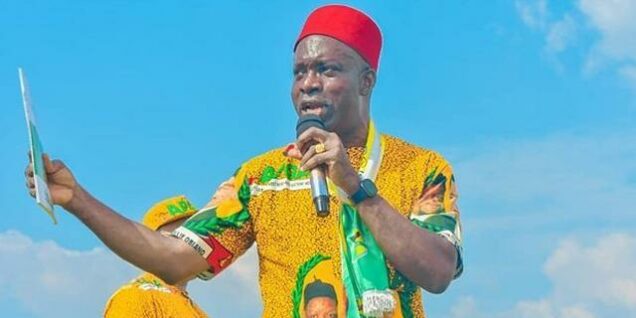 Professor Chukwuma Soludo, the candidate of the All Progressives Grand Alliance is cantering again to victory in the Ihiala supplementary poll, early results suggested.

But the Peoples Democratic Party may already have dismissed APGA’s victory as INEC aided.

Chief Ugochukwu Okeke , a chieftain of the PDP slammed INEC for the late deployment of electoral officials and materials for the supplementary election.
Source – PM News

Gunmen suspected to be bandits have killed seven policemen along the Tofa-Magami Road in the Gusau Local Government Area of Zamfara State.

SaharaReporters gathered that the incident occurred around 7:00 pm on Monday when the police operatives were patrolling the area.

The bandits were said to have ambushed the police operatives, “killing seven of them and burning their operational vehicle”.

“The whereabouts of some personnel who however escaped the attack are still unknown,” a source also said.

The police officers were said to have been overpowered by the bandits because of their large number.

It was learnt that the policemen could not call for re-enforcement due to shutdown of telecommunication services in communities outside the state capital.

Magami community is a few kilometres away from the trouble Dansadau area, which is known as one of the hotbeds of banditry in the state.

But despite all these, communities in the state are still being attacked and residents kidnapped and/or killed.
Source – Sahara Reporters