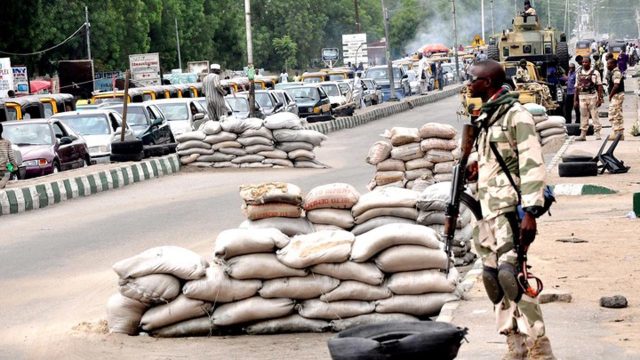 It is still unclear what is causing the explosion but roofs of buildings in adjoining settlements close to the barracks are being shattered and window panes in some buildings pulled down.

A source in the area, Ekong James, told Vanguard that the roofs of buildings in the estate he resides in were affected.
Source – Vanguard

The Kwara State Police Command has said that the, Owalobbo of Obo-Ayegunle in Ekiti Local Government Area of Kwara State, Oba Samuel Adelodun of Obbo-Ayegunle’s driver, his security man, his maid and his twice baby girls were kidnapped by unknown armed gunmen.

This was contained in a press statement signed and made available to newsmen in Ilorin on Friday by the Kwara State Command Police Public Relations Officer, Okasanmi Ajayi said the victims were kidnapped while on transit along Osi- Obbo-Ayegunle road on Thursday.

The statement said the incident happened at about 1830 hours of the day while his vehicle Siena with Reg. Plate No. bearing Owalobo of Obbo Ayegunle which was conveying the victims was abandoned on the road.

The statement further said on receipt of the information, the Commissioner of Police Kwara State, CP Tuesday Assayomo dispatched the Anti Kidnapping and other Tactical Units of the Command alongside local hunters and vigilantes to immediately commence a search and rescue operation in the area for possible arrest of the abductors and safe rescue of the victims.

The commissioner of police wishes to advise members of the public with useful information that can aid the quick rescue of the victims to make such information available to the command.

While assuring the good people of Kwara State of their safety and security at all times, the CP advises members of the public to be conscious of happenings around them, avoid movements in isolated and lonely routes at odd hours of the day.

He reiterates the commitment of the command to a security of lives and safety of citizens and residents of Kwara State.
Source – Sun News Online

Governor Mai Mala Buni of Yobe State has reshuffled his cabinet and created a new ministry.

Buni has transferred Abdullah Bego from ministry of home affairs information and culture to the new commissioner, ministry of Wealth Creation, Empowerment and Employment Generation.

While Mohammed Lamin, the commissioner ministry of Land and Solid minerals was posted to the ministry of Home Affairs, Information and culture.

The governor in a statement signed by his secretary to the state government, Baba Malam Wali, also scrapped the ministry of Land and Solid Minerals.

“Furthermore, the governor has also approved that the responsibility for administration and management of land matters in the state including all issues relating to land allocation, title registration, use, searches, charting, cadastral and planning and such other responsibilities as may be determined by the Governor has been transferred to to Yobe Geographic Information System (YOGIS).

“The function of ministry of land has therefore been us summed into YOGIS. With this development, the ministry of Land and Solid Minerals therefore seize to exist in Yobe State.”
Source – Daily Trust