Gunmen Kill 2 Police Officers, Presidency Will Elude Igbos, Mr Ibu Says He Can Do Without Sex For 2 Years It was gathered that the burning of the police station at Mkpatak, the killing of the two officers and twelve cows were carried out in coordinated attacks launched in three different locations in the LGA.

All the attacks are coming barely 24 hours after five police officers and a police officer’s wife were killed in an attack on Idoro Ikpe Police Station in Ini LGA on Saturday.

A source who pleaded not to be mentioned told our correspondent in Uyo that the officers were killed in Ukana Ikot Ntuen while the cows were killed at Afaha Ikot Ebak in the same LGA.

According to the source, one of the officers was burnt inside his car while the other officer on a motorcycle was shot by the hoodlums.

“Two police officers have been killed in Ukana Ikot Ntuen and one was burnt inside his vehicle, while the other one was shot by the bandits. As we speak, the situation is still tensed. They killed 12 cows in Afaha Ikot Ebak Village,” the source said.
Source – Punch

The INRI Evangelical Spiritual Church leader, Primate Elijah Ayodele, has issued a warning to the South East ahead of the 2023 presidential election.

According to the man of God, the presidency would elude the Southeast in 2023 and they will have to wait for another time before their presidential ambition comes to pass.

In his words: “Who said Igbo president is the solution? It’s not a matter of ethnicity or where you are coming from; as a matter of fact, we need a very good person that God has ordained to be our president.

“Igbo presidency is not the solution to Nigerians problem, I am not a politician but am speaking as a prophet not as a pastor because so many pastors have corrupted the system and can’t tell the truth because they believe they are of government interest.
Source – Lailas News

Mr Ibu Says He Can Do Without Sex For 2 Years

Nigerian actor and comedian, John Okafor, aka Mr Ibu says many women are attracted to him but he is not controlled by sex.

The actor said he could stay off sex for two years, saying he is not sex-crazy at all.

Mr Ibu, who disclosed this in an interview with Punch also said he had stayed off sex for months already because he was poisoned in December 2020.

He said, “I am not sex-crazed at all. I can abstain for two years. When I had a problem, I stayed off sex for a long time. I am not controlled by sex. As of now, I have stayed off sex for at least four months. Remember that I was poisoned in December 2020, so I need to recuperate before engaging in such acts. My wife is also missing me. It was not easy for her. She was crying every minute because she genuinely loves me.

“Some people have said that people with potbellies are not good lovers or sexually active but being good on the bed is relative. My answer to this is that I have 13 children (10 boys and two girls) though I lost one of them. That is the evidence of my sexual virility. I hatch children like pigeons.”

The actor also said he doesn’t cheat on his wife.
Source – Pulse Nigeria

CAN noted that it had no comment for popular Yoruba nation activist, Sunday Adeyemo, more commonly called Sunday Igboho, who insinuated that some elders in Yoruba land did not support the agitations for secession and establishment of the Yoruba nation.

Pastor Bayo Oladeji, the Special Adviser to the CAN President, Rev Supo Ayokunle, stated this in an interview with SaharaReporters on Sunday.

Earlier today, Igboho had appeared in an interview, saying he would not offer his condolences to Pastor Enoch Adeboye, the General Overseer of the Redeemed Christian Church of God, over the death of his son, Pastor Dare Adeboye, because the cleric refused to support agitations for the Yoruba nation.

Sunday Igboho had added that he would not sympathise with Adeboye or anyone who refused to champion the course of Yoruba nation.

When asked for his opinion about Igboho’s comment, Pastor Oladeji said, “I am sorry. No comment. If that is how you all see it, let it be. If CAN has been keeping quiet over the happenings in the country, if that is how you see it, too bad. We are not ready to reply Sunday Igboho.”
Source – Premium Times

Madness Going On In Some Parts Of The Country—President Buhari

President Muhammadu Buhari has lamented that there is madness going on in some parts of the country, while condoling with those who lost family members to the ravaing insecurity in the country.

In a veiled reference to the attack on police stations and security institutions in the South-East region, the President, according to a release by his spokesman, Garba Shehu, said he wondered who would protect the people.

“The President, in addition, takes this opportunity to condole with all who lost family members due to what he described as the ‘madness’ going on in parts of the country.

“The President calls on all local leaders to talk to their youths and warn them against being used to incite and foment violence. ‘If we attack institutions guarding us,’ the President wonders, ‘who will protect us in future emergencies?'” Shehu’s release on Sunday partly reads.

Earlier, Buhari stated that he would be modest with the forthcoming Salah celebrations and that no visitor would be expected in the Aso Rock Villa.
Source – Sahara Reporters 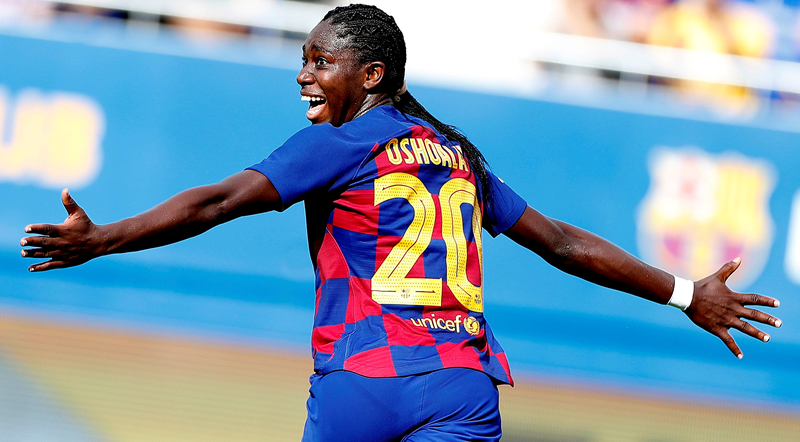 Barca’s victory puts them 16 points clear of Levante, who drew 1-1 against Espanyol and now cannot catch the leaders with their five games left to play.

It has been an incredible season for Barcelona Women, who have won all 26 of their league games this season, scoring 128 goals and conceding only five.

The league title is the sixth Barcelona Women have won in their history and second in a row after they also triumphed last year.
Source -Punch