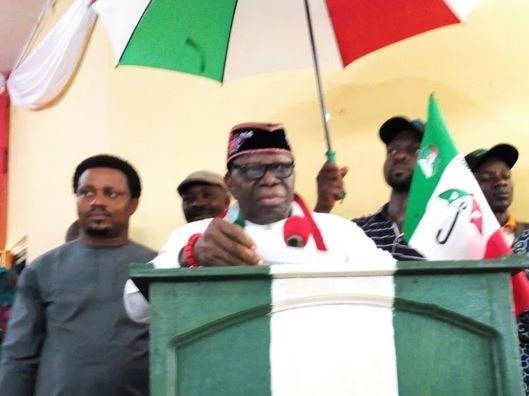 Mr Umoyo, who represented Akwa Ibom South District during the aborted Third Republic, passed on, Saturday, at his residence in Uyo, his son, Ime Umoyo, said in a statement.

He was said to be ill.

Mr Umoyo was a foundation member of the Peoples Democratic Party (PDP) before he defected to the All Progressives Congress (APC) in 2017 in his Etebi Ward 7, Esit Eket Local Government Area, Akwa Ibom State.

He said then that he was leaving the PDP because “a group of mafians” had taken over the PDP in Akwa Ibom State during the 2014 PDP governorship primaries in the state.

The former senator later returned to the PDP in 2018, claiming he was doing so in order to help Governor Udom Emmanuel win a second term.

“Although I did not subscribe to the process that produced Mr Udom Emmanuel as the governor, I accorded him the necessary respect and recognition as the father of all of us.

“So far, Governor Emmanuel – from my assessment and consensus opinion in Akwa Ibom and beyond – is doing well and, therefore, deserves my support for a second term.

“I have seen sincere commitment on the part of the governor to leave Akwa Ibom better than he met it.

“The provision of basic infrastructure, aggressive pursuit of his policies, and strategic intervention in critical areas of need; particularly in power infrastructure, health and educational facilities, Emmanuel has reinforced and fulfilled the intention of government, which is the welfare of the people,” Mr Umoyo said in a speech to mark his return to the PDP.