A passenger aircraft, ferrying tourists to the Maasai Mara game reserve, was forced to crash-land in Njoro, Nakuru county on Saturday.

In a statement from the National Police Service, the plane failed to advance, forcing the pilot to crash-land at a nearby village. The passengers comprised a 28-year-old Peruvian as well as a 29-year-old French national, who escaped the incident unhurt.

Nakuru county police commander Peter Mwanzo noted that the investigations had been launched in order to probe the cause of the accident. “An accident involving a light aircraft is reported to have happened earlier today in Likia, Nakuru County.  The said plane crash-landed after taking off on a flight to Mara North.”

“Aboard the flight were two passengers of foreign national and their pilot. All the three escaped unhurt. An investigation by respective agencies into the cause of the accident has been launched,” the NPS stated. After reports of the crash-landing broke, Kenyans took to social media to express the safety concerns of the passengers alongside the 27-year-old pilot.

In a video that emerged online after the incident, first responders, including locals, rushed to the scene in a bid to pull the passengers from the aircraft. The incident mirrors a similar occurrence in Tatu City, Kiambu county where a light aircraft was flying from Naivasha before crashing in Ruiru. A statement issued later by police revealed that the pilot was safely cordoned off at the accident scene.

A number of cases of plane crashes are often attributed to mechanical failure either as a result of manufacturing or design defects, poor inspection of the aircraft, poor maintenance, and navigation mistakes by the pilot among others. Further, bad weather is also a common cause as it leads to poor visibility.

Why I fought Jonathan out of presidency – Oshiomhole 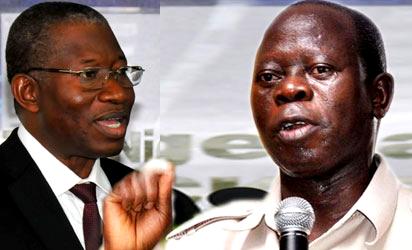 A former governor of Edo State, Comrade Adams Oshiomhole, says Nigerians don’t appreciate good leaders until they leave office. Oshiomhole, also a former National Chairman of the All Progressives Congress (APC), also said he fought former President Goodluck Jonathan out of office due to their differences in politics.

He admitted that Jonathan left lasting legacies for the nation, despite some of his weaknesses. “You (Jonathan) left legacies even though I had cause to fight because it is politics. The legacy you have left, there is no successor who can afford to do less”, Oshiomhole said yesterday.

Meanwhile, Jonathan himself and Olu of Warri, Ogiame Atuwatse III, spoke on why efforts of past leaders to unite Nigeria have not yielded results. They spoke at the one-year memorial lecture in honour of the late Captain Hosa Okunbo.

“But the logic of multi-party democracy is that even an angel can be defeated. You have set a standard that none of your successors can afford to go below”, the former Edo governor told Jonathan. “Part of your (Jonathan) legacies was when you launched the almajiri school and your thought was that no Nigerian child should be left on the street and also appropriated special funds.

“These ideas are not new but what we lack is the will to transform it to practice. We never know who are our friends until when we are no more. No one is appreciated until he or she leaves office”. Speaking at the occasion Jonathan said efforts of past leaders, especially those of the first republic, to unite the country had not yielded positive results.

Speaking on the topic ‘Lasting Legacy: Key to Nigeria’s Development Issues’, the former President explained that the leaders did their best to position the country for economic growth and development, but the attempts yielded more to centrifugal forces that reinforced ethnic cleavages. He noted that the present crop of leaders inherited a country that was already balkanized into three regions and later four.