The Minister of Information and Culture, Lai Mohammed, has come under attack for saying that the Lagos State panel report on the Lekki tollgate incident is fake news.

DAILY POST had reported that Lai Mohammed, during a press conference on Tuesday, said that the panel’s report cannot be relied on.

Recall that the panel was inaugurated to look into complaints of alleged human rights abuses by the police and the Nigerian Army during the EndSARS protest at the Lekki Tollgate.

However, the Minister described the report as a “tales by moonlight”, adding that it cannot change the government’s mind that there was no massacre.

Reacting, Nigerians said the Minister’s statement was heartless and insensitive to families of those who lost their lives at the toll gate.

@akpakan_koko, ”Merely watching Lai Mohammed now live is annoying, to say the least. He is at it again without shame like he is wont to do. My take from his gibberish utterances simply underscores the reason he is widely hated.”

@DrOlufunmilayo, ” Lai Mohammed says Lagos #EndSARS Panel Report is “fake news” and calls it “tales by moonlight, Interesting how the biggest consistent well-known liars in history of the Nigerian state since Independence is the Nigerian Govt itself.

@adebayoclem, ”History should treat Lai Mohammed as it did Joseph Goebbels. Spewing propaganda and distorting indisputable facts as a full-time job.”

@GiveDemFinish, He’s only interested in the riots that ensued after which were a DIRECT result of the shootings at the Tollgate. Lai Mohammed is an embarrassment.”

@Gabntoka, ”As expected, Lai Mohammed has now found courage after almost 2 weeks of silence to discredit the Lagos #EndSARS panel report. His insensitive comment that the “parents of victims who can’t come to testify are not fit to be parents” is just BALDERDASH! The attack on Kamsi, nko?”

@WhiteAmadasun, ”Not unexpected from the shameless king of mendacity, Chartered Liar Lai Mohammed. He has exhausted all the lies and deceits in his book to deceive Nigerians, only to tag #EndSarsReport fake news. What a crooked man!”

@theSCANDENTco, ”This government is shameless. How do you say this after such a detailed report has gone worldwide?

@Lady___Beee, ”Jokes aside, he called it fake news without evidence to counter it. See the kind of idiots ruling a resourceful country like Niger.”

@Ogkuku “I ask again, is there redemption for a man like Lai Mohammed? #EndSARS

@Ogbonaya “Obviously that wasn’t the kind of report they expected from the panel, they could no longer wait for their empty white paper.”

@Abolanle, “So disheartening these are the people leading us. So heartless.’

Sudanese ministers resign in protest against deal with military 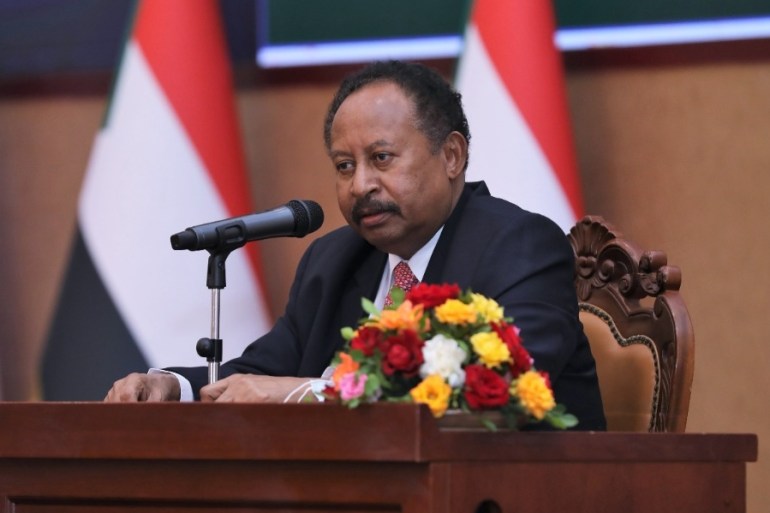 Twelve cabinet ministers have submitted their resignation to newly reinstated Sudanese Prime Minister Abdalla Hamdok in protest against a political deal between the prime minister and the country’s ruling military council.

On Sunday, Hamdok was reinstated after signing a political agreement with the head of the military council, General Abdel Fattah al-Burhan, to end a weeks-long crisis that threatened to undermine the country’s political transition.

While the deal was largely welcomed by the international community, Sudanese pro-democracy activists have rejected it as an “attempt to legitimise the coup”. They demand that the military should not be part of any future Sudan government.

The resigned ministers were part of a transitional government led by Hamdok that was dissolved on October 25 by al-Burhan. The military’s move sparked nationwide protests during which at least 41 people were killed in a security crackdown.

The resigned ministers on Monday. include the ministers of foreign affairs, justice, agriculture, irrigation, investment and energy, according to a statement issued by the ministers. The ministers of higher education, labour, transport, health, youth and religious affairs also tendered their resignation.

The statement said the five ministers were members of the Forces of Freedom and Change (FFC) coalition, which had shared power with the military before last month’s military takeover, were unable to attend Monday’s cabinet meeting.

Al-Burhan declared a state of emergency and dismissed the transitional government on October 25, amid rival protests and accusations between the military and politicians.

The transitional government comprising of civilians and military figures was formed after a power-sharing deal agreed after the popular overthrow of longtime ruler Omar al-Bashir in 2019.

The 14-point deal between Hamdok and the military also provides for the release of all political prisoners detained during the coup and stipulates that a 2019 constitutional declaration be the basis for a political transition, according to details read out on state television.

Hamdok, who had been under house arrest since the last month’s coup, said in an exclusive interview with Al Jazeera that he signed the agreement as he is driven by the “responsibilities” placed on his shoulders.

“I have made up my mind and signed this political agreement, although I know that many may disagree, object, or reject it simply because the people’s ambitions and aspirations were much higher,” he said.