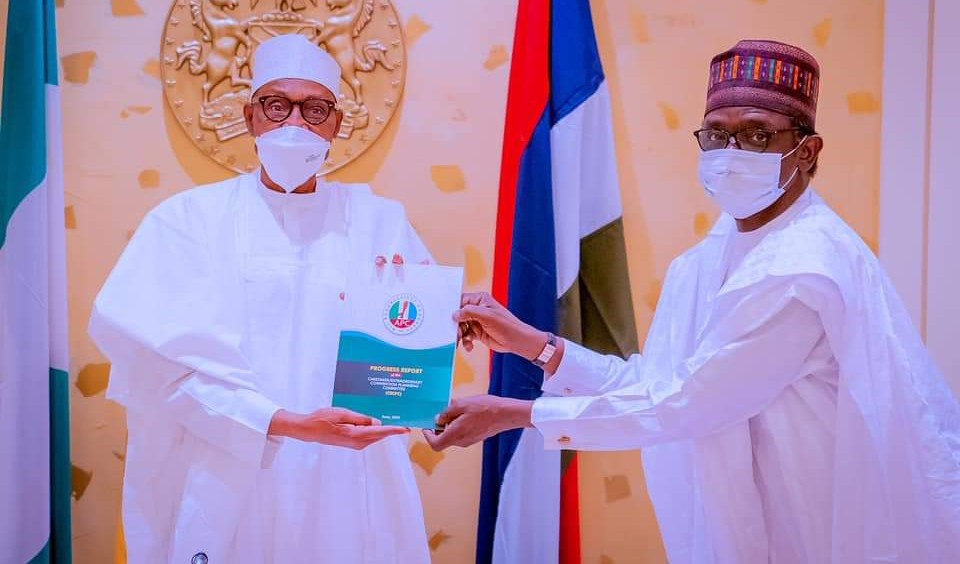 Yobe State governor Mai Mala Buni on Friday said the All Progressives Congress (APC) is now “peaceful, orderly and more accommodating” than when the former party chairman, Adams Oshiomhole was at the helms of affairs.

Mr Buni came on board as the party’s caretaker chairman shortly after Mr Oshiomhole was ousted out of office, leading to various candidates declaring themselves leaders of the party.

At a meeting between President Muhammadu Buhari and National Caretaker/Extraordinary Convention Planning Committee (CECPC) on Friday, Mr Buni said the party is doing better than it was under the watch of Mr Oshiomhole.

“The party is now more peaceful, orderly and accommodating than what we met on the ground,” Mr Buni was quoted to have said in a statement by Garba Shehu on Friday. “Although there was initial fear, the mobilisation and sensitisation was able to allay the fears of members.”

Mr Buni also said his leadership gave all aggrieved members of the APC fair hearing and was able to resolve issues with many withdrawing cases from court, adding that accumulated legal fees left behind by Oshiomhole has been cleared.

The Nigerian Army on Saturday morning said that its troops neutralized scores of bandits in a fierce battle, and recovered arms and ammunition.

In a statement on Saturday, Onyema Nwachukwu, Brigadier General, Director of Army Public Relations said, “Troops of 8 Division Nigerian Army (NA), while on a fighting patrol, came under fire of bandits operating along Mayanchi-Dogo Karfe and Fagantama villages in Talata Marafa LGA of Zamfara State.

“In the fierce encounter that ensued, the bandits were overwhelmed by the superior firepower of the troops.
“This led to scores of bandits being neutralized. The troops also recovered one PKT riffle, a large cache of ammunition, and a motorcycle,” the statement said.

According to the statement, “Relatedly, troops have neutralized 5 bandits in another encounter at Bingi village, in Bungudu LGA of Zamfara State. During the gun duel, the bandits withdrew in disarray having sustained severe gun shot wounds.

“The gallant troops recovered one AK-47 riffle, one motorcycle and 3 mobile phones from the routed criminals.

“While appreciating the combat resilience and renewed vigor of the troops, the Chief of Army Staff, Major General Faruk Yahaya urged them to sustain the aggressive posture in order to defeat all criminal elements operating in the North West and other parts of the country.

“He urged communities in the North West to support the troops with useful information at all times to enhance anti-banditry operations.”

Ministry of National Guidance and Religious Affairs Permanent Secretary, Howard Sikwela is dead. According to reports, Reverend Sikwela was unwell and admitted to Maina Soko Medical Centre where he has been receiving treatment.

Reverend Sikwela will be remembered for his tumultuous political journey that started when the Livingstone High Court nullified the election of a Movement for Multi-Party Democracy (MMD)’s Lukulo Katombora following irregularities after both UPND and PF candidates petitioned the election results.

A by-election was set by the Electoral Commission of Zambia (ECZ) for July 5 2012 and Reverend Howard Sikwela, running on the opposition United Party for National Development (UPND) ticket, emerged winner after beating his closest rival, PF’s candidate Josephs Akafumba.

Two years later Reverend Sikwela faced persecution from his own party when he was captured at the event to launch the link Zambia Project with PF leadership. The persecution within his own party forced him to resign and force another by-election in January 2013.

At the time of his resignation from UPND, Reverend Sikwela attributed his resignation to the UPND’s hostility towards the government, tribalism within the party and failure by the UPND to adequately support him when his election was petitioned by the Patriotic Front

“I must confess that I failed to practice the culture of being hostile to government and hence my pronouncement in September last year, to work with government for the development of Livingstone but this provoked a lot of insults and animosity from UPND members,” he said.