Lanre Afolabi, who served as Osun State Commissioner for Health during the tenure of Prince Olagunsoye Oyinlola, is dead. He reportedly passed on in a private hospital in Osogbo on Friday, after a brief illness. Oyinlola served as Osun governor between May 29, 2003 and November 27, 2010.

Lanre is one of the sons of former deputy governor in the old Oyo state, Chief Sunday Afolabi, who later served as Minister of Internal Affairs, during the first term of ex-President Olusegun Obasanjo. A source close to the family of the deceased, who preferred anonymity because he was not authorised to speak on the issue, said he took ill in his residence in Iree, Osun state late on Thursday.

“He took ill late on Thursday and he was rushed to a hospital in Osogbo. He died around 1:30 on Friday,” the source said. The ex-commissioner had been quite inactive politically since leaving office in November 2010.

The Lagos State Judicial Panel on Restitution for Victims of SARS related abuses and other matters on Friday compensated Kolade Johnson and 12 other victims of police brutality with N83 million. Late Kolade Johnson was one of the victims who got a posthumous compensation. His mother was presented a cheque of N10 million. Johnson’s family had previously testified before the panel on how he was killed when he came home from South Africa to visit the family in 2019.

Mr Johnson’s killing by a policeman triggered national outrage and a visit to the family by Governor Sanwo-olu. He was watching a live football match between Liverpool and Tottenham when he was shot by a trigger-happy policeman identified as Olalekan. The attack occurred during a raid of the TV centre by SARS officials. Another victim who was compensated was Mr. Olajide Fowotade. He was given N2million after he was brutalized by a police officer.

Mr Fowotade, 60-years old, asked for a N3 million compensation, when he testified. He said in 2017, one sergeant Ayo of Ketu division physically assaulted him and knocked out two of his teeth. Eleven other victims including the family of Jesica Adaobi, Oshidipe Sunday, Gloria Eze among others were compensated with varying sums.

The Police Command in Oyo State, has confirmed the killing of Mrs Olayemi Odetomi, wife of a former Commissioner for Local Government and Chieftancy Matters, in the state by unknown gunmen. The News Agency of Nigeria (NAN) gathered that Mrs Odetomi was shot dead on Friday in her residence at Ashi, Bodija Area of Ibadan, when unknown gunmen invaded her house.

The Police Public Relations Officer in the state, DSP Adewale Osifeso, confirmed the incident in a text message sent to NAN in Ibadan. Osifeso said that the deceased, aged 66, died immediately after being shot.

“Updates on Investigations would be provided in due course,” he said.

Ex-Corps Member, Others Who Worked During 2019 Elections In Rivers Lament Non-Payment Of Allowances

former National Youth Service corps member who served in Rivers State has complained that the Independent National Electoral Commission (INEC) in the state has not paid him his allowances for partaking as an official in the conduct of the general elections in 2019.

The ex-Corps member, who only identified himself as Babajide, said he tried his best to get the remuneration packages but was told by an indigene to desist from demanding it because it could put his life in danger.

File Photo
Babajide said he would not like to reveal his full name for security reasons.

He said while others attached to work with him during the elections were paid part of their money, he was not paid at all.

According to him, he lodged complaints at the local and state offices of INEC in Rivers, but his efforts were futile.

He said one of the ladies who worked with him during the elections had her leg broken after an attack by political thugs.

Babajide who officiated for the INEC at Odiabidi and Okporowo in the Ahoada East local government area, on Thursday lamented that election malpractice, corruption, and political thuggery are the bane of good governance in the Nigerian society.

“It was about the last election in Rivers State; not only in that Odiabidi East and Okporowo. There are also other places that the Ad-hoc staff were not paid. When I went to make enquiries at the local government, the person in charge of the ward actually gave flimsy excuses. It got to a time that I saw that the man was tired. He also told me that it was the Head Office that did not respond to my plight. He was equally tired as many people were demanding their money to pay them.

“The official at the local government-led everybody involved to the state office. When I got there, I was angry but they asked me to come back. Before going, I asked the man from the local government to follow me and he did. He also helped in asking them questions. We checked the record and saw my name with others.

“I was particular with other people that worked with me. I was one of their executives when I was serving in the local government. Maybe out of appreciation, the LGI called me to come and participate in the conduct of elections in the state,” Babajide said.

He also narrated how they were attacked by hoodlums that caused mayhem in Rivers State during the elections, adding that a lot of Corps members in the state refused to officiate because of threats to their lives by thugs.

“The Corps members didn’t want to partake in conducting elections because of the information they had gotten. There was a lady I was attached to as the polling officer but I actually performed that task. On our way to the place, we were attacked by armed thugs. They ambushed us including the soldiers following us. We had to go back.

“During the presidential elections, everything was peaceful though we were under tension. Thugs were guarding us. But the elections went peacefully.

“When it got to the time of payment, they didn’t pay. But the LGI went to fight for them. I couldn’t reach the LGI again before I left for another community in the state to go and work. That was Eleme. When I heard that the corps members have been paid, I went to confirm and met the LGI. There he told me they would pay the rest. When I was not paid, I went to the local government to ask questions.

“When nothing happened, I went to the state office of the INEC. I told them I would expose them. But, till now, they have not paid me. One of the girls that worked with me that was also affected can testify to this. Her name is Comfort.

“Two others, Comfort and Daniel, and I as far as I know from my local government are the ones that have not been paid. The reason why I didn’t go further with it was that someone advised me to drop the case because they can kill people for even N1, 000 here. I decided that I would make the complaint elsewhere after leaving the state.”

A native of the area, who resides in Port Harcourt, Ms Comfort Lawrence, who corroborated the story, said she was paid N13,500 out of N30,000 agreed.

Comfort who worked with Babajide confirmed that he had not been paid, adding that she did not know why his name was omitted.

“At the time of elections, he performed very well. I worked with him directly being an ex-corps member but he was not paid after the elections. They were saying his name was not in the record or that his name was omitted.

“Actually, I was paid N13,500 but the amount I was supposed to collect, which was N30,000. Babajide was not paid at all. There was another guy at that time too,” Comfort said

The sudden postponement of President Muhammadu Buhari’s trip to London for a medical check-up may not be unconnected to the current protest rocking his supposed destination, Abuja House in London, United Kingdom.

DAILY POST recalls that the president was scheduled to depart the country for his routine medical check-up in London on Friday morning.

A statement by Femi Adesina, Special Adviser on Media and Publicity to President Buhari on Thursday evening said the president would be expected to return to the country during the second week of July.

However, at the wee hours of Friday, some Nigerians in the UK, storm the Nigerian House in London to register their displeasure over the current unrest in the South-Eastern part of the country.

Reports said the protesters who converged at the Trafalgar Square in London, moved to the Abuja House ahead of Buhari’s arrival.

In a live video on Friday by the BBC pidgin, a large number of Nigerians were seen at the residence chanting songs in both English and Igbo Language. Some of the protesters were dressed in Igbo attire.

One of the protesters said, ”These are the Igbos, the ones that their youths are being killed.

“The Nigerian Army, police are in South-East killing our youths. Our parents have been maimed, our mothers have been raped, kidnapped, the Nigerian government has killed us, we are being marginalised”.

Few moments after the report circulated on social media, Buhari’s spokesman, Femi Adesina announced the postponement of the trip stating that a new date will be announced soon.

Although DAILY POST cannot verify the cause of the postponement as at press time, there are strong indications that the decision was taken to avoid embarrassment in the UK.

Some Nigerians who took to their social media to express their displeasure on the announced postponement without reason, said, “Buhari was running from shame”.

Reno Omokri, a former aide to ex-President Goodluck Jonathan, had also claimed that Buhari postponed his trip due to threats of placing him under house arrest in the UK. 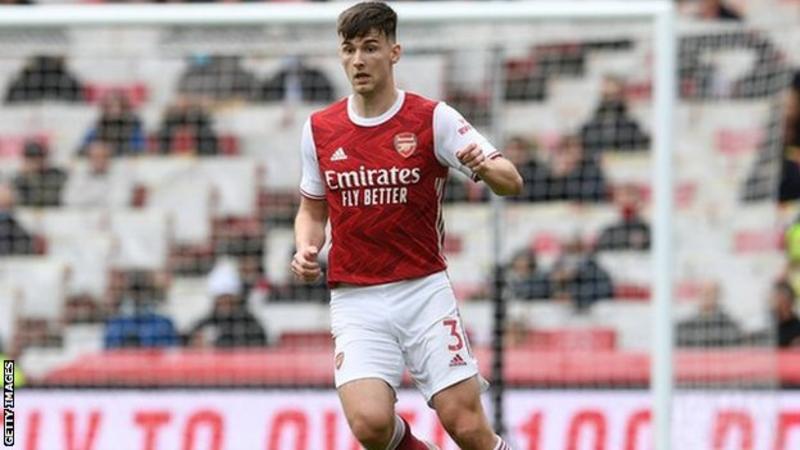 Arsenal defender Kieran Tierney has signed a new deal to commit him to the club long-term.

The 24-year-old Scotland international has made 62 appearances for Arsenal since a £25m move from Celtic in 2019.

The deal is reported to be five years.

“Anyone who has seen him play will recognise very quickly that he is a player of huge ability, but I can tell you that he is also a player with a fantastic attitude and mentality,” Arsenal technical director Edu said.

The work ethic of the full back was also praised by Arsenal manager Mikel Arteta, who called him “a pleasure to work with”.

“His quality, energy, commitment and professionalism, not only on matchdays, but every day in training are always at such a high level. ”