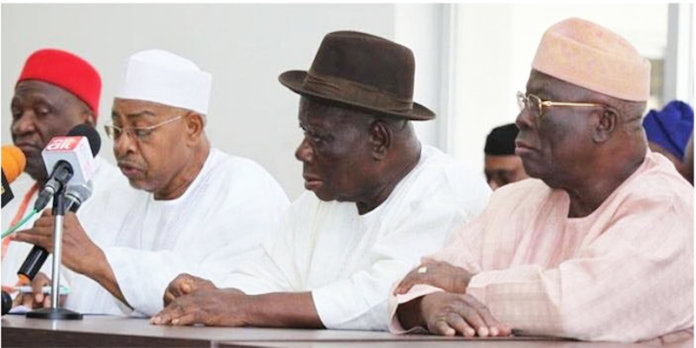 The leadership of major socio-cultural groups from the Southern and Middle Belt parts of Nigeria yesterday charted a new path for the emergence of a new constitution for Nigeria. Their proposals, made at a dialogue session christened, ‘The ‘Nigeria’s 2023 Presidential Transition Inter-ethnic Peace Dialogue,’ in Abuja, came against the backdrop of the ongoing constitution review process being carried out by the National Assembly through public hearings in all six geopolitical zones of the country.

The groups adopted a common position urging for an emergency national conference to birth a new constitution and pave the way for the restructuring of Nigeria. The socio-cultural groups, comprising Afenifere (South-west), Ohanaeze (South-east), Middle Belt, and Southern Kaduna Peoples Union (SOKAPU), said it was possible to reverse the current challenges facing Nigeria if the federal government could implement their recommendations. Convener of the summit, Kennedy Iyere, said Nigeria might not make reasonable progress in 2023 if no genuine dialogue was held to address contentious issues.

Leader of Afenifere, Chief Ayo Adebanjo, while presenting the position of the Yoruba, which was also adopted by both the Ohanaeze and Middle Belt Forum, said the process for a genuine consensus on an acceptable national constitution should henceforth begin with the production of position documents by all nationalities between now and December. He stated that going forward, Nigerians should be allowed to exercise their mandate and sovereignty on how they want to live together under mutually beneficial terms.

He added that the various regions in the country should be allowed to choose the type of government they want to adopt within their area, under a truly federal structure, which will guarantee some measure of autonomy and control over resources and policing of their entities. According to him, there should be no artificially prescribed number of regions in a manner that may foreclose the rights of the people that desire to organize themselves as a semi-autonomous regional member of the Nigerian state so long as the territory desiring such regional status can guarantee its self-sustenance and viability as an entity.

There were protests yesterday in the Federal Capital Territory (FCT) of Abuja, Lagos, Osun and Edo states over the increasing spate of insecurity and maladministration in Nigeria. The protesters included rights activists, civil society organizations (CSOs), labour unionists, youth bodies and other members of the society. In Lagos, activist-lawyer Femi Falana (SAN) and his musician son, Falz, joined the protest against insecurity, unemployment, mass poverty, and bad governance.

He and the other peaceful protesters carried placards with different inscriptions. The theme of the protest Falana led was: National Day of Action Against Insecurity in Nigeria. The popular lawyer and his group marched to the Lagos State Secretariat at Alausa, Ikeja, the state capital. They were received by members of the State House of Assembly.

Falana told the lawmakers that there was a need to provide for the poor so that peace could be guaranteed in the country.

He urged states that had not adopted the Child Rights Act to urgently do so and take the children off the streets to enable them to get an education.

“The Southwest has 54 universities; graduates are being churned out daily but nobody is planning for their future.

“We are asking you because Lagos is where everybody comes to. This is the home of every Nigerian, and we are asking you to intensify your efforts and increase the budget of the poor so that there will be peace.

“It is now clear in our country that without peace for the poor, there cannot be peace for the rich. For those who want to fight banditry and terrorism, we must put all our children in school,” Falana said.

In Osogbo, the Osun State capital, protesters converged on Nelson Mandela Freedom Park at 9:30 a.m and later march to the popular Oke-Fia Junction.

They carried placards and banners with various inscriptions and chanted anti-government songs.

Some of the placards and banners read: “End insurgency now”; “Buhari should speak up”; “Things are getting worse in Nigeria”; “No to poor living condition”.

Zamfara State Governor, Bello Mohammed Matawalle, has approved the suspension of His Royal Highness, the Emir of Dansadau, Alhaji Hussaini Umar, with immediate effect. Governor Matawalle further approved that the District Head of Dansadau, Alhaji Nasiru Muhammad S/Kudu, would oversee the affairs of the Emirate. In a statement by his Special Adviser Public Enlightenment, Media and Communication, Mallam Zailani Bappa, the governor also suspended with immediate effect the District Head of Nasarawa Mailayi, Alhaji Bello Wakkala.

Meanwhile, the governor has approved the dissolution of the State Executive Council and principal political appointees with immediate effect. The Secretary to the State Government, the Chief of Staff, and the Deputy Chief of Staff have also been relieved of their respective appointments. All Chairmen and members of the state Commissions and Boards of various agencies have also been sent packing. However, the dissolution does not affect Commissions provided for by the constitution of the Federal Republic of Nigeria.

“In view of these directives, all Honorable Commissioners would hand over affairs of their ministries to their respective permanent secretaries, except Ministry of Security and Home Affairs which would be overseen by Rtd DIG Mohammed Ibrahim Tsafe.

“Chairmen of Commissions and Boards are hereby directed to hand over to their most senior directors.

“The Head of Service would oversee the Office of the Secretary to the State Government,” the statement read.